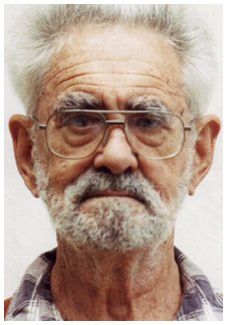 Ron Edwards was a well known Australian folklorist, artist and author. He lived near Cairns, outside Kuranda in the rainforests of Far North Queensland and spent most of his time writing, painting and publishing. He is probably best known for his series of books on Australian bushcrafts and collections of Australian folklore.

Ron was born and grew up in Victoria. His artistic abilities were soon recognised and he began his art training at the Gordon Institute of Technology in Geelong, completing it at Swinburne Art School, Melbourne.  In 1950, he founded what was to be the Rams Skull Press - Australia’s largest publisher of books on Australian folklore and bushcrafts.

Ron writes: “I was born in Geelong, Victoria, 10-10-1930 and brought up in a small coastal village which is now a tourist resort but was then only a tiny community of fishermen and a few small farmers. The farms were so small that everything was still being done by hand and horse in the old way. Crops were cut by scythe and sickle, hay was tied into sheaves and then thrown onto the wagon with pitchforks before being taken back to the farm and built into a haystack.”

“There was no TV and people would amuse themselves by gathering together every so often in a neighbour's house and having what was called a sing-song. Everyone was expected to be able to sing a piece, or recite some verse, and if we were in luck there would also be someone who could play an instrument, though this was less common.”

Ron continues, “The songs were just that, songs, no one divided them into groups, people just sang what appealed to them. My father sang sea shanties, others sang popular songs of the day, or more often old songs that were known to everyone. A few songs that we now know as Australian folk songs were sung, such as The Dying Stockman, but no one regarded them as being any different to a song such as A Bicycle Built for Two. People just sang what they knew and what they enjoyed.”

“I did not collect any of these songs, I just happened to learn them through hearing them.” Said Ron.

“I began collecting Australian folk songs in 1951 when John Manifold and I hit on the idea of publishing eight broadsides with illustrations and music, each single sheet devoted to just one bush song. It was a great idea, but strange as it may seem, we could only think of seven songs be-tween us, and John included one of his own songs to make up the numbers.”

In 1959, Ron left Victoria to go north and arrived in Cairns, North Queensland, where he began to collect songs and also write books on yarns and traditional bushcrafts. Every few months he escaped to the Torres Strait islands to collect songs and stories, and still usually manages to make an annual appearance at the Woodford Folk Festival where he presents workshops.

“Fifty years went past, and when I came to write the twelve volume work on the subject, called Australian Folk Song I found that I had listed a total of 4,680 entries, and typed out the words to about 800 songs!” Said Ron.

“Of course those four thousand entries are not all bush songs, included among them are recitations, children's rhymes, very rude verses, convict broadsides and sea shanties, a whole spectrum covering not only our history but life as it was and as it is lived today.”

“This huge 12 volume work did not just appear out of the blue, I had been working on it for over 30 years. The first edition came out in 1970 and had 1,200 entries, and every few years I would issue another edition, each larger than the last. The fourth edition had 2,000 entries, the fifth edition 3,000 entries.”

“While all this may sound impressive, it should be pointed out that most of the editions were limited to under 20 copies, and this present edition has only had 10 sets printed. My enthusiasm for the subject has never been matched by that of the public, and as our culture is slowly being buried by products from USA the interest becomes less and less.”

“In the 1950s, and into the 1960s there was a real interest in our own songs and stories, and such was the demand that mainstream publishers began to publish collections of Australian folk songs and recordings of the same had good sales. For one brief period it seemed that Australia was going to create its own identity, but alas, with the coming of television this was all lost in a tidal surge of product from the USA.”

“What little spark of interest remains is not shared by the average Australian, who has a far greater knowledge of B-grade American sit-coms than our own history and lost ideals.” Ron said.

“I like publishing because at least it keeps the material, if not alive then at least available. I like to think that in some future time Australians will suddenly become proud of their identity, and when this happens there may be one or two copies of books such as this around for them to draw on.”

“The present 12 volume set of this work took four years to revise and prepare, and sets out to list all the Australian folk songs that have ever appeared in print. It draws on what I have called the 101 Prime Sources, the most important collections dealing with the subject that have appeared, and which I have indexed in full. The idea has been to try and trace each song back to its earliest version, and this has proved to be a fascinating study.”

“When I began it all seemed so straightforward. Each collection purported to be newly collected material and therefore we should be able to find multiple versions of each of our songs, depending on where and when they had been collected.”

“But as my list grew I began to notice a very strange thing. Some of the new collections contained songs which were said to have been collected from ‘people in the bush’ but which were word for word the same as some previous printed version. So what? It was quite possible that a good song could travel around without any of the words being changed.” Ron said.

“But then I began to study these songs a little harder and found a very strange thing, and that was that a spelling mistake in one early printed version would appear in later collections that were supposed to have been collected independently! To collect an identical set of words is quite possible, but to collect spelling mistakes is quite another matter.”

“Even more interesting were collectors' additions. Often songs are collected where a few words or even a line or two have been forgotten by the  ‘informant’. A collector will sometimes fill in these gaps, and a good collector will always make a note detailing what has been added. Some later compilers of collections would publish what they claimed was a newly collected version of a song but, miracle of miracles, it would contain the added words and phrases!”

“I began to realise that what had appeared on the surface to be a large number of reputable versions of songs included among their number many pirated versions, and these were to be found even in the pages of well produced books from respected publishers. ”

“I also found a very interesting thing about these pirates, and that was that they were all lazy, and that was why it was not hard to trace the actual origins of their ‘collections’, whatever vague statements they may make about having collected ‘in the bush’, for they would use the songs that they pirated with the original spelling mistakes, added words and all.”

“There were some funny sides to this research. One quite important early collection had among its songs some that were ‘collected from J. Way’. I had a folk singer friend of that name and I asked him if this referred to him. He was rather surprised and said that it did, for he had visited the compiler of this collection, and in the course of the day had told him about a newly released record by A. L. Lloyd and sung him two or three songs that he had just learned from it. And so he became an 'informant', and Lloyd did not get a mention in the book when it was published.”  he said.

“Some songs which have appeared in up to twenty publications over the years, really only came from two or three original sources. The convict ballad Jim Jones for instance has never been collected in the field and is known by only one printed version, but it has appeared in at least 22 publications!”

“This one and only original was printed as a continuous run of lines and will not break up into even verses so some later editors made up extra lines and also played around with some of the words in order to create regular verses. These ‘extras’ allow the pirated versions to be easily traced back to their sources.”

“While this may just seem an amusing aspect of collecting, it has a serious side, for it is important that the original collectors are properly recognised. Before I began this research it was impossible to tell which books of songs were genuine and which were just pirated texts.”

“It is also important to understand which texts are the earliest and which are later re-writes. For instance anyone who sings Brisbane Ladies with the line;  ‘And it’s on through Nanango that hard-bitten township.’

“Is singing not the original but the words of the English folklorist A. L. Lloyd.” he said.

“My aim in writing this 12 volume work was to sort out the actual sources of our songs, and with all the important songs the words of the song are also included, sometimes from a number of sources.”

“There are for instance 26 versions known of The Wild Colonial Boy. All of these are listed, plus the publication in which they have appeared, and the full words of five different versions are also included.”

“The twelve volumes are in soft covers, it would have been nice to have had them hard-bound, but the work is already very expensive and this would have just added to it.”  Ron said.

Ron has written and illustrated over 300 publications including the popular bushcraft series, and other books on self-sufficiency techniques such as leatherwork and earth building techniques, plus various books on Australian folk music and Indigenous music and stories, plus numerous children’s books and several travel books. He has been the President of the Australian Folklore Society since 1984, and edits and publishes a quarterly magazine called the Australian Folklore Society Journal.

In recent years, Ron has also been publishing some limited editions containing his artwork.

The limited Edition include Australian Folk Songs which is twelve volumes, 3,194 pages in all, soft cover, Only ten sets printed. $60 a volume, which adds up to $720, and with postage $750. He has also produced a CD Rom of Australian Folk Songs This is a read-only CD, no sound, and contains the full text of the 12 volumes, but without the illustrations and reproductions of old song sheets. As a result it is of 2,370 pages. It contains the words to over 600 songs, but only includes 140 printed tunes. Price $100