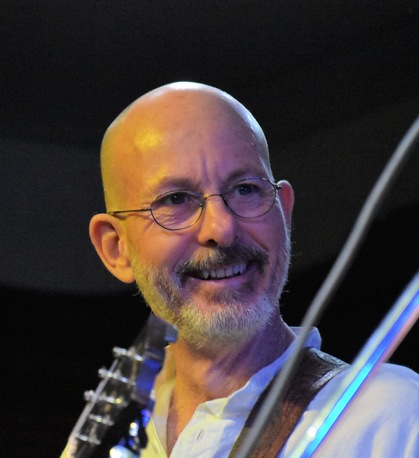 My earliest musical memory is those rainy days at my Grandpa's shack at Bribie, where one more hour of monopoly could not be tolerated and I could not face another Meccano set crane. I would spend hours spinning a pile of old 78's on the gramophone. Old big band and some blues comprise my first musical memories. Around 1964, on my mother's weekly shopping trip to Moorooka, I was attracted to the Music store. The first sound of touching that guitar was magic.

Coming from my radio and television were the amazing sound of the Beatles, that guitar sound just filled me with wonder. When I hear that sound today it still makes me tingle. This was the time of the Vietnam War and if the Beatles were the sound, Bob Dylan and Joan Baez were the message. I fell in love with the simple way those songs hit the heart and emotions. And to this day I still enjoy a simple song that says something meaningful as much as a great guitar solo.

After a few months of guitar lessons, reading dots wasn't doing it for me. I lost interest. The blues brought me back to the guitar with a vengeance - going with the feel, soloing for hours. Salisbury guitarist John Taylor was playing at school dances, he was my early inspiration. Taking me under his wing John gave me the belief in my own playing . John then went on to play with 'Michael Turner in Session', the rock gods of the time.

After jamming with friends, I formed my first real band 'Ra' with Mal Barnes, Len Spencer and Dave Midson. Later that band included Shane Leaney and Daryl Hearst. We played covers of Free, Humble Pie and Zeppelin to name a few. With the exuberance and energy of youth we rocked, playing to crowds and learning the skills of live performance. Some nights we would play at two or three different venues on the same night. Live music was about the only entertainment and people went to gigs in large numbers. Long standing friendships were forged with the members of all the other bands we would share stages with. This went on for 2 or 3 years and was a great learning experience. We played so many places in such a short time , that it is not possible to remember them all.

But some were special. Like performing at festival hall and playing the Aquarius festival at Nimbin

In 1974, for a short time, I played with 'Banquet', a 9 piece band. It was formed by Doug Hills to play support to 'Osibisa' at Festival Hall. When this band came to an end I headed to Melbourne to seek fame and fortune. There I hooked up with Daryl Hearst, Keith Megson and we headed to Perth where we formed the 'Ace Trucking Company' a funk band. We ended up in Kalgoorlie where we had the good fortune to do support for AC/DC - and got to party with Bon Scott. We were playing lots of gigs. On the Saturday nights we would do the early pub show then pack up and shift to a nightclub and play till 4 am.

When this band ended, Keith and I returned to Brisbane where we formed Brisbane's first jazz rock outfit 'Carnival' with Tony Mockeridge, Paul Draper and Danny Egan, and later Greg Wilson. Playing music above our rock capabilities lifted our skill level, though sadly not our incomes :\ This band played lots through 1976/77.

Escaping the rat race and heading for Mackay was the beginning of my next musical adventure in 1978. As soon as I arrived I went about forming a band with some local guys, Andrew Heggan, John Tebbit and ex 'Fairport Convention' drummer Shaun Freighter. The 'Razz' was born. We started out playing to 20 people at the stunning blue room overlooking the ocean at Eimeo Beach Hotel. We soon built the crowd to a couple of hundred people every Saturday night, getting up to four hundred wild punters. Tony Mockeridge and Keith Megson came up and joined the fun. This lasted for some years. We could live off what we earned on the Saturday night alone (the good old days). We would play out in the mining towns and travelled north doing gigs on the way to Townsville. I also ran a folk a night at the Ambassador Hotel which lasted a few years.

With the end of Razz I found myself back in Brisbane. After playing in a few bands, one making a big corporate dash at the big time, I found guitar bands in the early 80s were on the wane and my prospects with it. Becoming a father to Liam and Richard changed my priorities, and the need for a steady income brought me back to my love of nature and gardening as a way to earn a living.

After a few years of music taking a back seat, the time and desire returned to make music again. One Sunday I went to a Blues Association jam and met Jerry Ansell, Norm Hudson and John Campbell. We had a jam and the feeling was right, so I joined the T-Bones, playing Swing Blues at local venues. A wonderful learning experience. When this band ended I formed my own blues band 'The Nightflys' in various line ups that included old friend Trevor Gollagher, Jules Victor, Bob Gillett, John Campbell and Duane Williams.

One of my longest standing music friends, Ewan MacKenzie, called me wanting to form the 'Ewan MacKenzie Band'. This band included Ewan, myself, Rick Caskey, Matt Towers, Paul Hudson, and then Keith Megson. We recorded the album 'Patch of Blue' on an 8 track tape player in my Annerley shed, produced by Ewan. This album was awarded a Sunny Music Award for Blues Album of the year 2003 and remains a popular album.

After meeting Michael Tully during my early blues stints, we caught up again and started playing music together and, along with Rose Broe, we enjoyed playing in the Abba sing-along show at Woodford Folk Festival a couple of times, and also the 80's sing-along organised by Angie Kitzelman. I had the pleasure of my sons Liam and Richard playing along as well. These were very popular New Years Eve shows at the Festival and were a huge amount of fun.

Around this time i was invited to join the Michael Turner Band and we continue to occasionally perform with original In Session drummer Paul Olson, Greg Wilson on bass and the wonderful guitar playing of Mick Donnelly. Always an exhilarating experience .

In 2005 my old music buddy, Tony Mockeridge, came over to Brisbane from Christmas Island to record the 'Life gets Better' album with myself, Keith Megson, Bruce Hardy, John Tebbitt and Michael Tully. We recorded some old original favourites from our days in 'Razz' and some new songs. We were blessed with wonderful contributions from Karen Anderson, Angie West, Matt Moline, Rose, Nadia Sunde, Matt Towers, Ewan, and Garry Buckley.

Tony, Michael and I started playing as a 3 piece around this time, calling ourselves 'Little Secrets'. We played many local folk gigs and recorded the 'Peace in the Valley' album with the popular song 'Pretty Angry Boy'. Little Secrets became 3 Miles from Texas and we recorded our self-titled album in my home studio Fruitbat Records.

This was my first time at the controls. Learning to use the recording programs and production skills has been a huge learning curve which I would not have been able to do without the help and patience of my friend Mark Smith. Fruitbat Studios is being hired out more and more frequently as time and my recording skills improve. We recently finished the new 'Gollagher Ross' album, also 'Diceman' an up and coming band did their 5th album at Fruitbat.

Over the last few years I have had the pleasure of being invited to play with friends Mary Brettell, Mama Juju, Mark Davidson, Sadie and Jay, Shan Fay, and Steve Tyson. Also Stretch Kerwin, Michael Turner and at various jams and gatherings. I'm producing some great music written by prolific song writer Ralph Tyrrell and have been rehearsing a "secret" music performance project with Mark Smith and Dave Parnell.

In recent years I have been playing regularly with Sue Monk and Lachlan Hurst's band 'Jumping Fences'. We have a monthly show called 'Foco Nuevo' at West End, one of Brisbane's longest running and successful live concert music events. We are working hard on a new album to be finished before our proposed upcoming Tour to Cuba in January.

3 Miles From Texas continues to evolve with new sounds and contributions from Tony, Donna (Shepherd), Keith, Michael, Greg and Rose.

Other projects include recording some tracks with Michael Turner, also some powerful instrumental rock fusion with Paul Olsen and Greg Wilson in 'Circobidonic'.

After 45 years of playing, the time has come to try my hand at playing solo. I am currently working on some guitar pieces incorporating musical flavours from all my music loves, including eastern sounds, Indian ragas and scales, some blues and some improvised tunes. 'm still building up the courage to just do it. After hiding at the back for so long, it's a scary prospect to be alone on a stage. I want to incorporate acoustic guitar, the Puerto Rican Cuatro and Indian drone sounds to create a new and different sound experience making music of beauty, space and passion. A work in progress….when the album is finished.