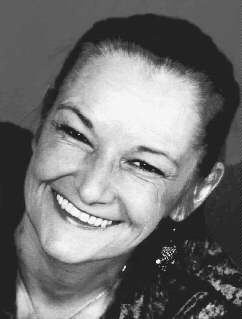 For those of you who don't know who I am - there is a reason for this - I am NOT a famous singer or musician; I am a behind-the-scenes worker at folkie events, and when I can get out of working I am part of the audience and clap wildly and "whoo-hoo" if you're really good! Folkies need audiences and there are so many of you great performers around Brisbane, that I feel in the minority and therefore quite rare: this is MY excuse for being the folkie profile!

I was born in Lancashire, England in Feb. 1950. One of my earliest memories - maybe 3 years old- was running away from my parents, drawn by a tune (Cock o' the North ), and the sound of bells- yes folks, I was born a Morris groupie! (Much later in my life I was coerced into embroidering 48 felt badges for Morris dancers costumes; the design was the Green Man, and the Morris men were the first group in Scotland. )

We lived in a dirty coal-mining town, so, when I was 9 and we went to live in the beautiful Lake District, it was like going to heaven from hell! I roamed the fells (mountains ), and paddled in the becks (creeks), and learnt the names of all the birds and flowers. My brother and I went to a tiny (15 pupils ) primary school at Troutbeck, where everyone was in the church choir to make up the numbers. I sang descant (they were desperate! ). We danced Maypole dances and Sword dances (with wooden swords that make a star pattern held aloft at the end of the dance ). We sang songs such as John Peel, The Keeper, Ilkely Moor B'aht 'At and The Boatman (this in Gaelic with Lakeland accents! )

My mother was a professional dancer, and when I was a teenager she and I danced in both Scottish and English country dance groups; great fun! It was a great time then, there were so many wonderful musicians, one of my favourites being Bob Dylan. Later, in 1978, I went to a Dylan concert at Blackbush in southern England. There were a quarter of a million people there; quite an amazing experience, and one of the best concerts I ever saw.

I left school and went to Edinburgh to train as a nurse. I spent my spare time in the old music library, copying down the words for folk songs, and haunted the Waverley Folk Club, where Billy Connelly sang.

Then I married and I gave up nursing to move to Norfolk. We lived in a very old cottage with beams and an inglenook fireplace, and we kept chooks, goats, ducks, cats, and grew vegies, which the chooks, goats, ducks often got to before we did. I had two lovely children and lost touch with the folk scene.

Time passed, we lived on a boat for a while; that was interesting and we met some lovely people - similar to the friendly, kind people I have met in the Australian folk scene. I think it's something to do with not having much money (how many folkie millionaires do YOU know? ), but lots of empathy, and being willing to share in good times and bad. Then when Maggie Thatcher got in for another four years we gave up on Britain as a congenial place to live, and we applied for Australian emigration. In 1983, after two years of bureaucratic bungling and dogged determination, we arrived in Queensland to find Joh B-P in charge! Never mind -the weather was fantastic, the people were friendly, and the countryside truly beautiful. I have never regretted coming here, I love Queensland and couldn't imagine living back in gloomy old Britain.

Then a good friend, Carole Wood, took me to the first Woodford Folk Festival for a day. I had such a good time, and we went every year after. I remember seeing Kristina Olsen and loving her wonderful sense of humour and great voice. I also saw the Battlefield Band and was so impressed.

About four years ago my marriage ground to a halt and I looked around to find new friends and a life for myself. I went to the first Woodford Tree-planting festival and this was the start of my new life! I met so many lovely people that weekend. I helped at the Solstice Festival , cleaning toilets! I had a great time, and then got involved with Woodford, I joined Signology with Elli Schlunke , making signs. I did this for four years and have had some fantastic times; quite a few of them dressed in a tacky red frock! The Festival and its workers are really special; I feel privileged to be part of it all.

After the Tree-planting I went to the Celtic Tearoom of Maleny, and picked up my first Folk Rag. What a great find - as it says on the cover, it's "priceless"! In it I found all the information I needed. Next stop was the Kookaburra Folk Club where I was made welcome by Stan Arthur, who has been so kind to me, and found friends in Anne Infante and June Nichols and many others. Inspired by their enthusiasm, I started to help with the Folkies Old and New Concerts, (raffles, CD sales, backdrops, coffees and cakes -you name it! ) I also helped with the Pod Folk Club when it was operational.

This year at Woodford I will be doing massage and Reiki for volunteers, and helping with the Singing Shed, started last year from a brainwave of Shez Wright's. I helped organise the first fundraising concert for the Shed, and again this year. I love being a helper/audience person in the Brisbane Folk scene and would recommend it to anyone! Come and join me, then you too could get your face on the front of the Rag and experience fame at last!

And finally, to all the folkies at the Kookaburra and the fabulous sessions at the Story Bridge Hotel, and anyone who is, or has been, involved with Woodford Folk Festival : Thank you for sharing your talents, and making it so much fun!