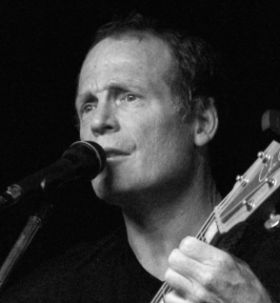 My Dad was a formally trained and accomplished classic pianist but decided he could better feed a family as a mining engineer instead of a concert pianist. Our house was a small hub of music in the mining town of Broken Hill in the 50's and 60's. My Dad taught my sister the piano and tried to teach me. I disliked learning the piano so much I once fidgeted so much during a lesson I fell off the chair (my Mum now laughs when she tells that story but at the time...ouch!). A very boring and lacklustre stint with the classical violin followed the demise of the piano. Next it was the classical guitar and as much as I loved the guitar I wanted to be able to play the latest pop songs with the other kids at school, not sit in lonely rehearsal rooms.

The day I plucked up the courage to tell my Dad I didn't want to learn the classical guitar anymore he got in first and told me how proud he was I had not given it up ...erk.. so I shut my mouth and kept going. While hitching around Europe on a gap year I was given an old guitar and a bit of classical busking paid for food and helped meet interesting people. My first original song popped out by the side of the road in Yugoslavia and instead of elation there was a strange sense of guilt, that composing belonged to others, I was doing something 'unnatural' and could go blind. While I thank my classical music teaching for that but I also deeply thank my parents for the gift of music. How 'different' homes feel to me where there are no instruments around.

The first music epiphany came in Italy when I was shown how to play the percussive playing style for Cowgirl in the Sand by Neil Young. The guitar became a wondrous instrument of expression instead of an instrument of repetitive slog. This song is now the only cover I play.

The second epiphany came at University when I was getting paid $18 a night as wine waiter for 4 hours of work when the solo musician was getting $30 and a meal for only 1.5 hours of work. I thought "I could do better" and I could also get a meal instead of secretly eating the bar cheese. I was in the reserve army so I went off to camp to earn money for a steel string guitar. After three weeks of walking, sitting, sleeping and eating in non-stop rain, mud and leeches I luxuriated for hours in music shops choosing my guitar. Being dry and warm was also a big bonus.

Still on Uni holidays I settled in to a month of learning covers, only interrupted to give my bleeding fingers a couple of days to heal. Back at Uni I got a weekly gig in a wine bar. I refused to play happy and uplifting John Denver type songs (I was being a prima donna) and by playing Leonard Cohen, Cat Stevens & America it didn't take long to reduce the wine bar's clientele down from 40-50 per night to a few souls who would sit crying in to the only glass of wine they would buy for the night. My original songs, thankfully long forgotten, which I snuck in didn't help either. Exit university music career.

As happens to a lot of part time musos, family and work took priority. However, the guitar was always near. Theatrical productions, campfires, the occasional jam session and playing percussion in a small country band where I could sneak it in occasionally.

The third epiphany came at the 2002 BluesFest when I heard John Butler playing Betterman. I was blown away (well I teared up if you really want to know). The shackles of limited vision were cut away. The guitar came out of the cupboard and songwriting became an inseparable part of life.

Moving to Newcastle NSW at a particularly tough time of life a lovely folk singer, Maureen O'Brien. was telling me how much she liked my work. I commented how they were all "break up" songs. "Well maybe that's where your head space is at the moment" she replied. In a show of macho bravado I denied it to her but later humbly admitted to Maureen she was dead right and I dedicate the resultant song about moving on in life "Squeezing through Doors" to Mo! Songwriting took on another dimension.

On the music scene came my son, Paul, who had become an excellent drummer at the expense of the neighbour's sanity. Playing together not only tidied up my loose rhythms but gave me some pretty fond memories. The first time we played live together I was so nervous I only introduced him as the 'drummer'. I am not allowed to forget that!

For me, folk stories are not just about events but very much the permutations of minds and relationships that give us understanding, insight and sometimes just a good laugh. The music has to suit the words and vice versa. Different stories evoke different music expression. I have no problem if the song evolves to resemble folk, jazz, blues, rock or a pastiche. Folk is such a flexible medium. I cannot force myself to write a song on a topic. The music evolves first, usually through doodling on the guitar, and the melody evokes the feelings that lead to a topic.

My style has been labelled, thanks to Julie and Lyn at Folk Redlands, as 'Urban Folk' which I think is very cool and is the first label I have no desire to push against. Playing solo is coming to a natural end, there is so much more fun, creativity, musicianship playing with like minded people.