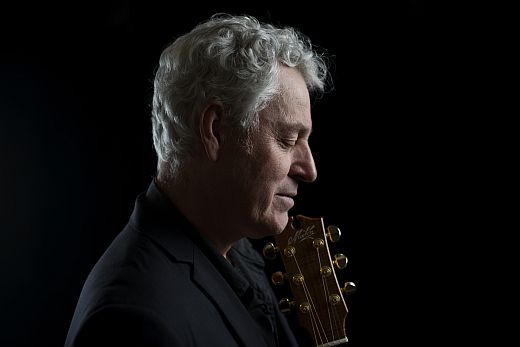 Brisbane-based Michael Fix is acclaimed as one of the world’s finest acoustic guitarists.

He has won three Golden Guitars and numerous other awards in Australia, and tours widely throughout the world, particularly in Europe, and SE Asia.

Over the past two decades, he’s released 15 albums, together with several singles, DVD's, songbooks and EPs, and has established himself globally as a leading festival and concert performer.

As a Maton guitar endorsee (with his own signature model guitar), his guitar workshops are in high demand all over Australia and internationally.

I remember being fascinated with the guitar at an early age. My father played a little - so there was a guitar in the house - and I was always drawn to it. Before I learnt how to tune it, I would learn simple tunes by ear (like 'Happy Birthday') and play the melody on just one string.

Age 11, I discovered pop radio – 2SM broadcasting out of Sydney. This is in the early 70s, and pop music of that era was very broad, not so genre segregated as it is now. So, I would be hearing Cat Stevens, James Taylor, as well as Deep Purple, Led Zeppelin, the Kingston Trio, Daddy Cool, various solo Beatles...

Common to all those styles was the sound of a guitar. Electric, or acoustic – it was equally exciting to me. The track that specifically turned me on was 'Eagle Rock' by Daddy Cool. The sound of that opening guitar riff coming out of a 2 inch AM radio speaker cut straight to my soul. (I still love hearing it!)

It wasn't too much later that I hooked up with a few school friends and we put together our first garage band. I was the youngest – at age 13 - And we started to pick up some gigs here and there, playing at local community dances and wedding receptions. My hometown Wollongong is very multicultural, and there were many clubs in the region, catering for every ethnic group. This meant plenty of work for local musicians, particularly if you were willing to learn 'continental music', that is, hits from the European charts.

Age 15 I was playing in a semi-pro band, three nights a week, playing Latin American favourites as well as tunes from the pop charts. So, at that tender age, I was earning pretty decent money as a guitar player, and it never occurred to me that I would ever do anything else!

By 18, I was playing in a popular local rock band, and by that stage I'd had such a broad range of experiences (and some formal training), that I decided I wanted to get involved in the world of session work. I was already a partner in a Wollongong recording studio 'Main Street Studio', writing and recording jingles, as well as putting together demos for local musicians, but I knew that I had to move to Sydney to learn from the 'big boys'.

It was on one of my exploratory trips to Sydney that I found myself in the Musicians Club, watching a performance by a band that featured a young Tommy Emmanuel on guitar. We quickly became friends, and he introduced me to the Sydney session scene, and to the world of solo Fingerstyle guitar.

In the '80s, I had a steady stream of work playing on jingles and albums. I played with various bands – including Reg Lindsay, The Bushwackers – and then joined Sydney Folk/Rock/Classical group Hat Trick.For seven years we must have played every club and pub in Sydney. It was an entertaining and eclectic band, and the wide-ranging repertoire still informs me today. (You can see some clips of us in our '80s glory, performing on various TV shows, on YouTube.)

The 90s opened a new era. I was playing on many country music albums, and these sessions lead to a connection with Queensland singer-songwriter Graeme Connors. He invited me to tour with him, and association which lasted from 1990 – 1996. I had already been composing instrumental music during the 80s, but it was around this time that I started to get serious about my writing. I was being influenced by sights and sounds collected in those years of travelling with Graeme to far-flung parts of Australia, and this new confidence won me a publishing deal with Music Sales.

In 1991 I recorded my debut solo album, Tantalise, in 1993 came Fingerspaintings Both CDs got some radio airplay and I began build up an audience with a succession of solo shows.

By this time I was playing festivals around Australia; everything from guitar festivals, to jazz and blues festivals, folk festivals, and country music events. I was producing many projects for other artists in my home studio, and writing production music for TV usage.

I was signed to ABC Records, and I picked up some nice support slots with artists such as Christine Anu, and Anne Murray, as well as appearing with international guitarists including Albert Lee, Tommy Emmanuel, Leo Kottke, and Martin Taylor.

A personal highlight occurred On Australia Day 1997, where I opened the 'Gift to a Nation' concert, performing 'Classical Gas with Tommy Tycho’s orchestra. This event was filmed before 150,000 people and telecast live across the nation on the Seven Network.

I started my Europe tours in 2004, following an invitation to create a Michael Fix Maton guitar, which would be a new model to present to music stores in Italy. Appearances at guitar festivals there lead to invitations to other festivals, and the network grew (and still grows) from those initial meetings. I was travelling twice a year to tour in Europe (particularly Germany), but I've cut that back to once a year to free up time for my other passion: studio recording and producing.

These days, I try to maintain a happy balance of performing, composing, and producing. Im particularly enjoying presenting guitar workshops, tutoring at music camps, and delivering seminars on performance and stagecraft.