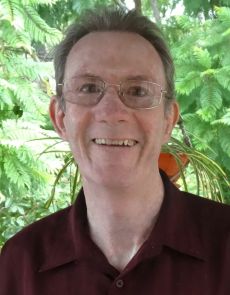 Born in Murwillumbah NSW my earliest memories are of Crow’s Nest in Qld. I came to Brisbane at age 5. I was exposed to a wide variety of music as I was growing up. There were diverse tastes across the family from Classical music, Opera, the big stage musicals to Rock ‘n’ Roll, Calypso, Blues and Jazz.

Somewhere in my early teens I developed an interest in folk music and later started to play guitar but I never really developed it. My grandfather enjoyed writing stories and my grandmother loved the works of Henry Lawson and “Banjo” Patterson. One of my cousins is a poet and playwright and has had many of his works published.

At school I demonstrated some talent when it came to the written word, including poetry. So, in later years when I tried my hand at song-writing, I had already developed some of the skills required.

In my late teens I spent a brief period of time learning about theatre as a member of the Villanova Players. My fondest and most vivid memory of that time was playing a small part in a production of Robert Bolt’s A Man for all Seasons. Later I worked with some friends in setting-up a Little Theatre Group within the YCW Movement in Brisbane.

My working career commenced with a series of jobs that I either lacked interest in or hated. But eventually I found something that I really got a buzz from and I spent some 20 years in various capacities in the Training & Development Industry and in Organisational Development and during that time I completed a degree at Queensland University and did some travelling. Next to Ireland and Scotland my favourite place is Norway – every day there brought forth another stunning vista, sensory overload I suffered! But the local brew settled me down.

Song-writing and singing were always bubbling away over the years and I received great support for my efforts from my good friends Steve Crass, Richard Staal, Kerry Conlon, Greg Conlon and Lesley McBurney. Then in the early 1990s, a set of circumstances came together and I commenced a musical collaboration (which became and remains an enduring friendship) with Julie McGonigal. We commenced as a duo and later we became a trio with the addition of Brian Wright. We performed at Folk Cubs, Festivals and occasionally, in the company of others, played for bush dances.

All these adventures pushed me to develop as a songwriter, player and performer. I quickly came to see that there was more to this music “lark” than I had ever appreciated. It was during this time that Don Nichols and June Nichols joined Julie and I in a band called Seanachaidh which for a short time also included Madonna Garrigan.

Through Julie, I was introduced to Dale Riddle and Joy Duncan. Many readers will know them as the “landlords” of that wondrous “estate” called “The Duck” where so many of us have experienced great music sessions along with Joy’s highly creative, imaginative and always entertaining party presentations - onya Joy!

During this time I met and got to know more of the people who play and share their music together and who contribute their talent and time to making our music community so vibrant. This process still continues as new relationships are formed and more experiences are added.

There are many people in this community who have contributed to and enriched my musical life. I thank them all. There are some who have done so in various significant ways. In addition to those already mentioned they include, Stan Arthur, Anne Infante, Roger Ilott, Penny Davies, Mark Smith, Mary Brettell, Paul Cannon, Debbie Budd, Michael Tully, Sue Tanner, John Lewis, Rose Broe, Dave McConnell, Maxine Chisholm, Ross Roache, Christine Douglas, Robin Etter-Cleave, Ewan MacKenzie, Harry Mackenzie, Chuck Euston, Chrissy Euston, Colin Nightingale and Jan Nary.

Song-writing forms a large part of what I do musically. My favourite songwriters include Gordon Lightfoot, Tom Paxton, James Taylor, Paul Simon, Mike McClellan, John Williamson, Graeme Connors and Dougie Maclean. There are others male and female but these top the list. They are skilled storytellers, their imagery is rich and their melodies are well-crafted. Those are the qualities that stand out for me.

As a songwriter, I’ve released three CDs to date; and I have been very fortunate to have had the support of some of our community’s very fine singers and musicians collaborating with me on those projects. I feel very privileged to have spent some time in their company, experiencing their talent and humanity.

I’ve loved all the opportunities I’ve had to play music solo and with friends at sessions and gigs over the years. There have been many highlights and I hope many more to come. It’s special to be with friends and experience the joy and fun of music-making. It’s good also to sit back in awe of the talent and skill of many of our performers, to enjoy what they do, what they give.

Our community works also due to the efforts of those who organise venues, festivals and publications and those who play our CDs on their Radio shows. They provide us with places to play, to share our music and to learn from one another.