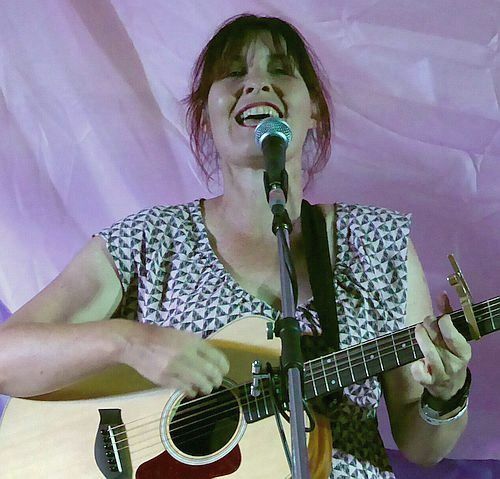 Lizzie Flynn is a Brisbane-based singer-songwriter. She performs original songs as a soloist and with her band ‘Lizzie Flynn & The Reckoning’. They recently performed at Cygnet and Illawarra Folk Festivals over the summer of 2016. As well as performing, Lizzie also writes songs for theatre productions and other creative projects.

I first loved music for all the wrong reasons.

When we were eight, my cousin, Cecilia, and I walked to piano lessons after school. We both hurried down the small-town streets to get to Mrs. Williamson’s house, not rushing to get to her piano, but to her kitchen table.

Waiting for us was a glass of red cordial and some buttery cheese biscuits. Red cordial made ‘Skip to my Lou’ skip along a lot more quickly.

You see, my lovely mama was a health nut, so I only tasted sugar once a week at Mrs Williamson’s house. Those piano lessons were sweet.

Fast forward to High School, and I survived ‘Danny Boy’ on my clarinet for Speech Night, sung a solo in our school musical, a strange yet popular spoof of ‘Superman’, and by the time I finished school I knew I wanted to do something with my music.

While I was thinking, I got a journalism degree and a boyfriend.

Luckily, something happened to me after I graduated that has proved very helpful for many aspiring musicians. I became unemployed.

It was during this jobless state that I listened to the CDs my brothers were sending me. One was living in Texas, USA, and was into acoustic folk/country such as Shawn Colvin and the Indigo Girls.

The other brother was living in Melbourne and sending me Paul Kelly and Michelle Shocked.

I saw a Deborah Conway gig and wanted nothing more than to write songs like she did, so I went out and bought a guitar. A cheap one.

My mama, who was into dog-breeding at the time, was very concerned. Declaring that I had ‘too much time’ on my hands, she said that if I didn’t find a job, then I had to help her with the dogs. I was, literally, in the doghouse.

I cut my teeth on bar chords while Border Collie puppies tried to bite my toes. It wasn’t bad, but it wasn’t quite the career I was looking for. Neither was my first ‘real’ job, which was pushing papers at the local council. I resigned and went back to the University of Southern Cross at Lismore to get a Contemporary Music degree, majoring in vocals.

I heard lots of music and met so many influential people during that time. One of them, Lisa Couper, became a lifelong friend. We formed a duo called ‘Lily’; played numerous gigs including the Woodford Folk Festival; and I was a bridesmaid for her wedding. Giving the after-dinner speech at her reception was of course, the toughest gig of all.

After Lismore I joined a band named ‘Ode to a Goldfish’ and moved to Melbourne. It was a time of good music, good food, and crazy share-houses. I remember one house where my house-mate built a mezzanine in the roof above his bedroom, accessed by a secret pull-out ladder, because he needed more space.

He never did tell the landlord.

I completed my Graduate Diploma at The University of Melbourne and got a job teaching music at a Greek Primary School, as well as taking lessons in Beginners Greek. This enabled me to understand the 6-9 year olds who I was teaching, or at least work out their family tree. (ie: Grandmother = Yia Yia)

Looking back though, I think my songwriting came into full flight when I moved to Dublin. With a last name of Flynn, I always had a yearning to live in Ireland. I had grown up listening to my grandmother playing traditional Irish tunes on her piano, and when I arrived in Dublin I embraced the strong independent music scene with groups such as The Frames (with frontman Glen Hansard), Damien Rice, Lisa Hannigan and Mundy.

Finding a day job as a secretary, I spent my nights watching and performing gigs. I was influenced by the heartfelt melodies and lyrics of the Irish singer-songwriters. It made me practice more. And it made me write a lot of songs – mostly about love and homesickness.

On returning to Brisbane, this collection of songs became ‘Hush’, an independent album, which received an Arts Queensland Grant. ‘Hush’ was named after the single on the album, and I was glad it gained favourable reviews and allowed me to tour the East Coast of Australia.

After Hush, my songwriting and performing was extended out of my comfort zone, when I was asked to collaborate with my brother, Queensland author Pat Flynn, to write and perform children’s songs in a play, based on his best-selling book ‘Beeware’.

‘Beeware’ was produced by the Queensland State Library and performed at Out of the Box Festival – the largest theatre and music festival in Australia for 3 to 8 year olds.

Since ‘Beeware’ I have continued to write original songs for musical theatre productions, in collaboration with That Production Company. These have included adapting Pat’s book ‘The Tuckshop Kid’, and ‘Eric Vail, Epic Fail’, another adaptation of a popular book by Michael Gerard Bauer. These plays were premiered by The StoryArts Festival in Ipswich, and were watched by hundreds of students who were not afraid to sing along!

I am currently writing another suite of original songs for That Production Company’s theatre adaptation of Morris Gleitzman’s novel ‘Two Weeks with the Queen’.

As a singer-songwriter, you can often get caught writing about your own life and the characters in it. But what I love about writing for theatre is that I get thrown into an existing story with a variety of characters. It has expanded my song-writing skills as I work to meet the brief and musical style the director and producer wants.

‘Two Weeks with the Queen’ will be performed in October 2016 - about the same time as I will be launching my new CD, titled ‘You & The Open Sky’.

Many of these songs were imagined while driving my 1993 Toyota Corolla from Brisbane to Melbourne. Probably because I could go nowhere fast, I had a lot of time to think and look up at that sky.

There are some advantages in having an old car then.

As the title suggests, ‘You & The Open Sky’, is about embracing a clean slate while also acknowledging all the people who have been a part of my life.

Thanks to those who supported and encouraged me, and gave me a little red cordial along the way.