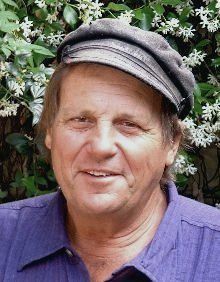 In the mid ‘60s I stepped into the old Folk Centre, still upstairs in Ann St, Brisbane - a smoky room full of interesting people, many of whom became friends. (Kathy’s kitchen - ice cream on toast and good coffee at 10 cents a cup - now there’s a memory for those who know). This was the right environment for me and it has remained so.

I soon encountered other clubs with magic names like the Coolibah, and the Old Primitif, where one could exit the mainstream. In those days the last train home from the city was at 11.15pm - not much good to a folkie; I soon learnt to drive. Many trips to places further afield, like Frank Traynors in Melbourne, the Folk Attic, the Purple Parrot etc, and the Cairns Folk Club; the transition was complete - I was a folkie.

Learn to play and sing - my first guitar at age 15 had been second-hand from a shop in the Valley, a little bit of Country & Western, making some progress. My second guitar at age 19, was a Strat copy (Let’s play some R & R, that’s the thing now), but the call was strong, so back to trad folk music - wrong guitar. Third guitar a Maton nylon with a history (I still have it). This has been superseded, but I now seem to run a rest home for retired instruments. Having learnt a little, I really enjoy what I do play, and I have a ton of fun with a few songs, and listening to a huge volume of others. I don’t perform, but I have become a perpetual consumer of this folk phenomenon, being in the back seats of nearly every concert. I only sing if there is enough rum.

Born 2/4/1947, the offspring of pioneering families with Prussian, English and Gypsy heritage (all dinkum Aussies). The first music that I remember is when very young we had some old 78 records, mostly Carter Family, southern hillbilly etc. Sometimes we would borrow a wind-up gramophone and play them - what a treat! In those days it was special. Otherwise we could listen to the Amateur Hour on the radio, a big old console appliance that appeared to consume half the lounge room. Other times when the kids sat on the floor and old folkies played fiddles, saws, bush bases and accordions, or at family nights when some rellies played or sang - these became exciting memories which have developed a love for live entertainment of all kinds.

In the mid 1950s (age about 8), at the Bushman’s Carnival in the exhibition ground, I can still see the old Bushwackers band on the back of a red Bedford flat-top truck, playing on traditional instruments (and gum leaves), songs and music rescued from obscurity. These things have stuck in the memory.

Lessons in more conventional music at school were boring and irrelevant by comparison.

Life so far had led me to a love and appreciation for the Anglo Celtic and Australian folk traditions, which has never left me. Education in Brisbane, then on to work. I joined Telecom as a technician. This training opened the way for me to become involved in sound engineering in the early 70s. It was a lot different then, but this was the way to be a part of all the gigs and to meet and associate with The Stars.

The grass is always greener on the other side of the fence, so this was the time to travel and work, always on to the next job which would be better. Up and down the east coast and central Australia, and to work and live in Cairns, Northern Queensland. Here I could rekindle my associations with some folkie type old time workers who I had met when younger. These people had filled my head with tales of times past in NQ and further afield. These stories and anecdotes keep me in touch with some of the earlier traditions of our country.

I was married in 1976 and raised 2 kids (one an amateur actor and one an amateur writer, who now follow me to Woodford). I was eventually divorced; this period was topsy-turvy but certainly not all bad. Most of this time I lived in Pomona, and there, I came to know the crowd from the Cooroy folk club - I was back in the folkie family.

1998 saw some time in America visiting friends, across the southern states, music clubs and some work and a lot of wide horizons. New Orleans was great then, talk about music! Bourbon St, was as good as expected, or better. The mighty Mississippi and on to Mexico: that’s an experience - tons of fun and interesting people and music.

Involvement with the old Moreton Bay festivals, and many others, launched me on a course of interest in folk festivals, culminating in Maleny and then Woodford, from where I was unable to escape.

I watched this grow from a cow paddock to today’s world class, culturally significant, venue and saw what can be done by a mob of hippies with the right attitude.

Here, I have assisted Gerry and Dave with organising the waste management and recycling department of Garbology. Over the years countless volunteers have worked with the recycling and composting departments, to achieve excellent results, creating a world-wide reputation for tidy streets and venues. Last festival we processed in excess of 1000 cubic metres of waste; capturing over 20 tons of compost material, and a huge amount of recyclables. We have come a long way since we did this all off the back of a small flat top truck. Many thanks to all the workers who have sweated blood with us. The scope of this task demands enormous hands-on effort from all concerned.

Soon it’s back for another year, building cultural bridges; I imagine it will be as exciting and demanding as ever. Then it’s into recovery mode, and getting on with making some more of the good old times, maybe taking a trip to the UK and Ireland to find where it all began. That’s all folks!