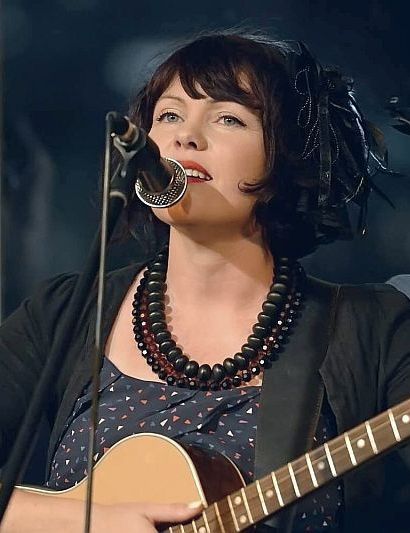 Kylie works as a producer for Woodfordia Inc and and performs in the four-part harmony group, The Pockets. She was awarded a Qld Music Award in 2016 for Jazz Composition and has spent the last two decades performing with jazz/folk groups Laique and Firefly, as well as running a singing studio.

Hello fellow music lovers. I’m writing these words from a cafe in Mullumbimby, surrounded by sleepy just-risen musicians, and the sounds of buskers flowing in from the street. Folk music gigs… aren’t they just the bees knees? Last night I laughed, listened, learned and at one point wiped away a tear in a particularly touching moment. Like countless others, I have spent my work-week running around like a headless chook, and to suddenly stop and allow stories and songs to disrupt the daily grind… well, it’s the point of music isn’t it? Compelling, empowering and disarming and very much up to the task of dragging us all away from the mundanity of 'life admin' and 'work cave' concerns.

In the beginning music was always an integral part of life. Sunday afternoons were spent listening to my dad's progressive rock albums on the balcony of our North Qld home. Ok I’m being poetically evasive, North Qld makes it sound tropical and romantic. It was Townsville… I grew up in a dust bowl in the 80's. As dire as that sounds, with its dearth of culture and in the shadow of the Army Barracks and Castle Rock, a Dolby stereo and an impressive collection of pristine LPs (Alan Parsons Project, Frank Zappa, INXS and The Doors were my favs) was the very best of the possible outcomes. These musical influences came from my Papa. From my Mama, I was introduced to Vivaldi’s Four Seasons and musical theatre - I adore Les Miserables, I even read the book! (It’s very long).

Growing up, my bright red double-cassette player was the raddest thing I owned. I wrote my first songs using it as a multitrack! My two favourite recordings were Carol King's Tapestry and the Eurythmics' Sweet Dreams. When the tape would inevitably stretch and snap I would lovingly stick the two ends back together with sellotape. I particularly enjoyed the familiar blank second of playback that indicated the part of the song that I’d loved and replayed the most - So much so that I’d snapped the tape. We break the things we love, with love. There’s a Shakespeare-esque life lesson there…

Neither of my folks played a musical instrument when I was young, but these days, Ma plays the flute and Pa plays the saxophone. My brother has always been gifted on the guitar. Family band = Christmas is noisy. It’s the best.

I left Townsville to study classical voice at the Qld Conservatorium of Music. It took studying opera to realise just how much I loved folk and jazz. Opera isn’t for the faint hearted, musically it’s a beast, requiring a level of dedication that I struggled to tap into, until the day I heard an Ella Fitzgerald recording. At that moment I knew exactly how my fellow classmates felt towards Puccini and Dame Joan Sutherland, except I felt that passion for the First Lady of Song, and I realised in a heartbeat that I was at the wrong platform in this musical journey (I only scarcely avoided an A Train pun here).

So I left uni and started dating a fellow opera drop-out, a blues guitarist who drove a two-tone pink ’62 EK Holden and played a sassy cherry red Gibson 335. We started a band and I sang gritty jazz standards through the bass player's amp using a $20 mic to a crowd of avid restaurant goers at The Pizza Shop in West End. We played for pizza, and sometimes, if it was a really busy night, I’d help out washing glasses.

The next brick in the wall was a stint as a backup singer in a Pink Floyd concept show, complete with a high ponytail wig and a (very) short black dress. Nightly, each of us back up singers would have our 1 minute of fame during Great Gig in the Sky. What I learnt about touring was 1) that it is entirely possible to live for months on hot chips and 2) one can have a relatively good nap in places such as, but not limited to: on the floor under rows of chairs in a civic theatre, on the floor threaded through ankles of the tour party in a Tarago mini van and nestled in the cosy embrace of an empty road case. All these places smell like beer.

I went promptly back to Jazz after that tour, and found immense and fulfilling comfort in discovering the back catalogues of the women who were to journey with me over the next decade. These women were Ella Fitzgerald, Ani DiFranco, Joni Mitchell and Tori Amos and they influenced my next decade of music as a Jazz singer for weddings, parties and anything. Mostly weddings though. I am not married. Coincidence? Maybe.

Then gypsy music arrived in my world via an animated film named Les Triplets de Belleville. I went to three different cinemas to catch every possible showing of this independent, little-known film. The soundtrack was full of odd objects, trinkets and clanky pianos and also introduced this wonderful new style of guitar-based music to my ears - the harmonious pompe of Manouche, sizzling with minor 6 chords and vibrant hot club energy. From this moment I embarked on a decade of learning French, started my 5 piece gypsy/folk/jazz band Laique, and learned the tenor banjo, baritone ukulele and tenor guitar.

Around this time I also discovered Gin. It sounds silly, but in researching the history of of this delicious botanical flavour explosion, I discovered the inter-war period, prohibition and what it meant for music, muses, musicians, women and the mixing of race, class and gender in speakeasies, something that had not really occurred in society before that time. Most of the writing I did for Laique came from reading these stories (Drinking martinis can be legitimately called research… can’t it?)

Eventually I found myself fascinated with the clockwork of festivals and events. My mates and I had been putting on backyard concerts with home-made punch and couches poached from kerbside collections in fancier neighbourhoods than ours. Over the years I took on a role as co-director of the Brisbane Fringe Festival and freelanced as a producer with various events. Eventually I found myself getting more and more involved with the festival that had my heart. I had volunteered at this festival as a Marching Girl in a street theatre troupe singing parody songs in tutus and Doc Martins in my youth, it was of course, the inimitable, Woodford Folk Festival.

These days, Woodford is like a second family and I work there on staff as a Producer, helping make fabulous things happen. There are few choices in life that truly define you, but finding my home at Woodfordia is genuinely one of them, and though I perform music a little less often these days, I love that every day I’m surrounded by an enthusiastic bunch of fabulous (and slightly mad) creatives who together provide the kind of experience that I had last night, where music is a shared experience in a universal language.