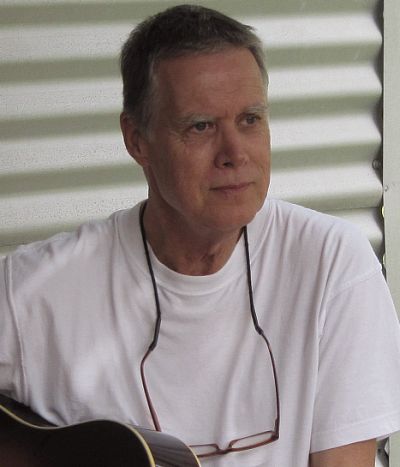 This little story is really a tribute to the warmth and generosity of the local folk community, for without them I probably wouldn't be playing music. Indeed, I wouldn't have most of my current friends (yes you could have avoided me folks!), wouldn't be going to so many music festivals, and probably wouldn't be having so much fun.

I was born in the fifties, and during my childhood there was hardly any music in the house as neither of my parents were musical. Both were artists and scholars, and my first passion was painting. Neither played an instrument, and I don't remember hearing much music on the radio. Fortunately their lack of musical knowledge saved me from a life of playing the trumpet.

The local primary school had a brass band and I loved the look of the trumpet. Aged five, I asked my parents for one for Christmas. Instead of a shiny brass trumpet, they got me a strange plastic toy clarinet. That was the first time in my life I had to hide my disappointment, and I guess, now that I think back on it, my parents must have also been trying hard to disguise their relief, when I didn't try to play it.

My second set-back to a career in music was instigated by the Department of Education and Mr Thompson, the music teacher at Ascot primary school. Day two of Grade One we were all marched around to the music classroom which housed both a large piano and the large Mr Thompson.

When the thirty or so children were seated on the well-worn wooden benches, each child was then asked to stand, and sing the three or four notes he played in the piano. After each child sang, they were graded into As, Bs and Cs, or lastly 'No Singing'. Being very shy, I was scared to death of the attention and just mumbled. Of course I was immediately consigned to the small group of the non-singers. In a classic example of the enlightened education we received in the fifties, this group were instructed to spend the remaining eight years of school sitting at the back of Mr Thompson's music class never to open our mouths.

Enlightenment arrived for me on the 19th March 1962 when Bob Dylan released his self-titled debut album. My slightly older cousin and her boyfriend would come to visit us regularly at that time and they always played and sang folk songs, particularly Dylan, Woody Guthrie and Pete Seeger tunes. This not only awoke a huge interest in music for me, but also Dad.

Around that time there was a folk programme on, I think, 4BC of all stations, and it was the most wonderful source of folk music. Dad began to record it on a Philips reel to reel tape recorder he bought just to start listening to this type of music. Over the next few years I became quite familiar with the music of the early American blues players, and people like Kate and Anna McGarrigle and Ramblin Jack, just through that radio station.

Of course growing up as a teenager in the sixties, I also became addicted to popular music. Because one tended to fall into one of the two camps, Beatles or Stones, I gravitated decidedly to the Stones, and along with them, The Animals, Them, The Yardbirds, and so on, and made the connection between the American folk-blues I had loved in my early teens and these new bands who loved the same sources.

During my uni days I haunted the Folk Club, and was there every weekend for many years, drinking cider and eating cinnamon toast, courting girls, and listening to the talents of the Brisbane folk scene. You know who you are!

In my twenties I disappeared up into the Pacific and when I returned, I got my first job down in Adelaide where there was a great jazz scene, and one particularly good club in North Adelaide which didn't open until about 10pm and went through until the early hours. For many years I didn't listen to much else but jazz. My favourite, not surprisingly, was Chet Baker.

One night, around 10 or so years ago, I went to a Kristina Olsen gig up at Paddo and picked up a Folk Rag. Browsing through it I discovered there was folk music being played at The Kookaburra, my local pizza shop. A week or so later I dropped in there, and to my great surprise, a much older Stan Arthur was playing with the Wayfarers. I couldn't believe it. There he was, still playing 35 years on since I had last seen him. And as I looked around the room, gradually I began to recognize other faces, also all with 35 years of love and life added to their complexions.

It didn't take me long to make friends with Anne Infante and Stan and all the others up there who over time encouraged me to perform. I had bought a guitar the year before and had been teaching myself to play a bit, listening and watching Youtube videos. I still can't believe their generosity, and their encouragement, so different from old Mr Thompson back at primary school.

With an audacity that can only be excused by my ignorance, I proceeded to try to learn five new songs a week, and take them up to the Kookaburra to play and sing. I absolutely loved it. A few years later, after Stan passed away, I joined the Wayfarers and played with them for a year or so.

At the same time, I was discovering a passion for likes of Townes van Zandt, Guy Clark, Steve Earle, Lyle Lovett, Blaze Foley and any number of other Texas singer/songwriters who have drew me away from the Irish folk music I used to originally play and love. And through these same songwriters I was drawn to the fingerstyle guitar playing of Merle Travis and the Rev Gary Davis, as well as their contemporary stylistic descendants, particularly Steve Earle.

So the last ten years has been an amazing rush for me, the discovery of a new passion to sit alongside my art, and perhaps most importantly, the opening up of my life to tens of new and dear friends, all musicians, all equally passionate about a life full of music. So, where's the next festival??