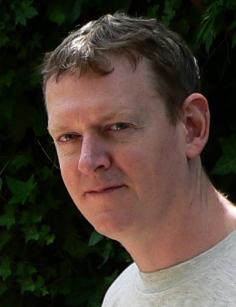 I was born in Darwin back in '66, although it doesn't matter how many times I say it, no-one who’s heard me speak ever believes me. Except my parents, obviously. By the time I was two years old we were in Papua New Guinea, then on to England where my father went to get specialist training as a gynaecologist.

I spent my formative years in Manchester and then Nottinghamshire. Luckily I was forced to learn the piano (parents, yet again), and even had the chance to sing Carmina Burana with the Halle Orchestra as part of the school's Special Choir.

My first taste of folk music came when I was about twelve, listening to heavy metal and punk. My father gave me a tape he’d borrowed from the library, saying Here, you might like this. Prophetic words indeed, as I’ve listened to very little else ever since. It was Steeleye Span’s Original Masters, and a track called Alison Gross. I can still remember arguing with my mum as a twelve year old that I really did want to spend my whole Christmas allowance on a copy of that tape (eight quid in the old money…). Over the next four years I bought 17 Steeleye albums, and also discovered Fairport Convention, The Albion Band, The Battlefield Band, The Tannahill Weavers, and an almost endless stream of English, Irish, Scottish, even Welsh and Cornish bands. By the age of 14 I was a regular at the folk club in a local pub, and sang Salisbury Plain while blushing furiously (it’s sung from the woman’s point of view). My first ever unaccompanied song!

Once the magical age of majority was passed there was no stopping me. Aided and abetted by a group of friends I had infected with my addiction (and a driving licence) I started to travel to gigs and festivals: Cambridge, Cropredy (1983 – was it really over 20 years ago?), Trowbridge. So many good memories, from now famous festivals which were then still small enough to be attended only by true enthusiasts, and meeting the likes of Richard Thompson, Dave Pegg, Ashley Hutchings. Suddenly you realise it’s not just you and a couple of friends who like this stuff, there are thousands of us. A couple of years ago someone wrote a song about that feeling – The Crowd - and it stirs my heart to listen to it. I still have a tube of signed posters from that era which I’m going to frame one of these days.

I met my wife Amber in the local pub, and wooed her with tales of the Sewage Works I’d just been working on. She was over from Tassie on a working holiday, and fed up with being permanently cold and damp, so we sold up and moved to Melbourne in 99. By sheer chance I discovered a monthly gathering in Trentham run by Tommy Walsh, who would gently coax each person in turn to do a song or a tune or a poem. We got some weird stuff, but it was a very inclusive setup and my favourite kind of session.

A trip to Ireland in 2002 led to sitting all day in a bar listening to a guy playing an instrument I’d never realised existed before: the B/C button box. I wrote down the exact make and model, and bought one from a music shop a week later, then promptly changed jobs and moved to Brisbane and didn’t pick it up for a year.

Walking past the Story Bridge Hotel one day I got a whiff of folk music, and found what was left of the session there. Two weeks later I came back and it was gone. Eventually I traced it through the Aussie Nash and on to the Broadway, where the irrepressible Glen Donald was hacking and coughing his way through authentic Australiana, and have not looked back since. I’ve met so many beautiful and talented musicians and singers over the years I couldn’t possibly list them all, and the best thing is that new faces are still appearing.

For the last couple of years I’ve been involved with the beginners’ session (now at the Clarence Corner) and Friday nights at the Celtic Corner in Manly, which have both been lots of fun, as well as the main session and occasional paying gigs with Sharon Jackson and Vince Morgan. If only I could find the time to do a bit of practice now and then I might improve, but what with the sessions, and having two young children, and Maidenwell and Woodford and Imbil and now Neurum Creek...

What’s next? A move to New South Wales is on the cards to join the ferals around Nimbin. Does this mean it’s the last you’ll be seeing of me? I’m afraid not. Like herpes, or Don Jarmey’s sleeveless shirts, I’ll keep on coming back. And I’m hoping to learn a bit of DADGAD guitar, if I can get the ludicrously talented Davydd McDonald to stand still long enough to show me some basic chord shapes. And as for the next generation? What can be more satisfying than having your wife turn on the car radio and hearing a 3 year old voice from the back seat piping We don’t want this! We want Daddy’s music…!