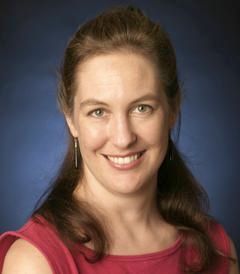 Singing is part of who I am. Apparently, as a child I was so demanding about lullabies that Mum taped them so she could escape!

I grew up with classical music, Gilbert and Sullivan, and musicals such as Joseph and His Amazing Technicolour Dreamcoat, Oliver and West Side Story. Mum and Dad also loved comedy, introducing me to artists like Flanders and Swann. And they taught me to really appreciate silence. They encouraged me, and my older brother and sister, to sing and play instruments, and after many years of longing to make music themselves, have found their niche in the Songlines Reconciliation Choir in Brisbane.

Dad had grown up in Wondai, near Kingaroy, Mum between North Africa, France, England and Italy, but when they married they lived in Australia: Brisbane, Sydney, Melbourne. We moved to Surrey, England soon after I was born. Seven years later - God bless mad parents - we returned to Brisbane via Europe, Turkey, Afghanistan, the Middle East and India - five amazing months of adventure.

A friend at primary school played lute and got me involved in Geoff Wills' instrument-making and repair workshops. At the time I was learning piano and cello, but I was fascinated by mythology and full of fanciful notions about bardic traditions, so I decided to make a lap harp. With a lot of extremely tactful help from my father, Geoff, Don Henderson and thin Don the cabinet maker, I built a 3-octave harp. After the workshops I would sit around in the back yard drinking home brew with them and feel myself a man among men. Heady stuff for a 12-year-old girl! Sadly, I was in love with the romance of the harp, rather than the harp itself, and quite unprepared for how hard it would be tune and play, and in fact I can do neither!

As a teenager, I sang with my sister and brother. Redgum's Poor Ned in three-part harmony was a favourite, along with many classic rounds. I don't remember where the folk music was coming from, but certainly they introduced me to Redgum, Goanna, and a lot of the Aboriginal bands of the time: my first pub outing was to see No Fixed Address and Warumpi Band at the National Hotel. At this time, too, Mum would drag us all to the Moreton Island Protection Committee's New Year's Eve bush dances, which was daggy but fun.

Despite all this, I didn't really get into 'the folk scene' until 1993, when I moved to Cambridge. I'd never been aware that there was a scene to get into!

When I left school in 1985 I wanted to go to the Conservatorium to become a singer - how I thank my lucky stars that I didn't get in! I was so ego-driven it would have been a disaster. Instead I studied languages at UQ, spent time in Paris, Beijing and Taipei, and then fell madly in love with Dave, a cyclist from Nottingham, and pedaled off with him on a 1000-mile adventure from Singapore to Bangkok. I emerged hooked on cycle-touring, and Dave, so we headed off to England together for more adventures.

I rediscovered music when I was looking for a way to meet people in Cambridge. Rowena Whitehead's singing workshops, Talking in Tune, introduced me to folk clubs, folk music from many traditions, improvisation and heaps of ways to sing better, more and differently. I also got a strong dose of Trad English through a Tudor Re-creation at Kentwell Manor in Suffolk.

When spring forgot to come to England in 1996, we headed back to Brisbane, moving next door to Nicole Murray. Baldrick and the Cunning Plans used to rehearse there, and there were fabulous folkie parties - Nic introduced us to John Thompson and a bunch of folkies, and they took us under their wings when we went to Woodford Folk Festival for the first time in 1998 or 1999. We discovered that folkies were an exceptionally nice bunch of people, that we liked most of the music, and that Woodford was amazing. But we were buying and renovating a house, pursuing careers, etc. and didn't really get very involved...

In 2000, Nicole and I collaborated on a book with Sandy McCutcheon, and as a result I got involved in Sauna Club and the folk scene. Also in 2000 I ran my first vocal workshops: Voice Playground. I felt like a fraud, but then I usually do. Singing has been such a gift in my life, I wanted to offer that to other people. Dave and I fell apart in 2003; singing, and the folk scene, helped me weather that. In 2005, I teamed up with the enthusiasm and expertise of Andrea Baldwin, Nicole and John to run singing workshops as The Voices collective, and that has been great.

My attention wanders in most instrumental music (not so much with cello); it's vocal music that really grabs me. I tend to stumble across things and get interested - Currently it's Scottish Gaelic singing, with The Shieling. I don't have any Scottish background, but I heard Ann Martin and Ishbell MacAskill, and fell in love with the songs. I enjoy the challenge of getting my head and tongue around a new language and a new style of music. And I love the way that, with such a niche product, it's so easy to get gigs! In 2006, I'd started performing solo a capella, with encouragement from my folkie friends, and particularly Keith Urquhart and Angela Kitzelman who gave me my first gig at Neurum Creek Acoustic Music Festival, but I found it incredibly exposing, and so hard to market! My internal blurb went something like: Um, I sing songs, quite plainly. I don't really know what genre - they're probably a bit obscure for most people... not exactly a marketing triumph!

I'd love to sing more jazz, maybe some Renaissance English stuff - all that polyphony - and it would be a hoot to sing with instrumental players (ooh, a band!). I'd like to increase my general musical skills so I can improvise better and I'm working on accruing good karma so I can come back with a fabulous bass voice!

Once I realised that not getting into the Con had been a lucky escape, I promised myself that I would reserve music-making for joy. That's what I tune into musically: does this bring me joy? As long as it does, I know I'm on the right path.