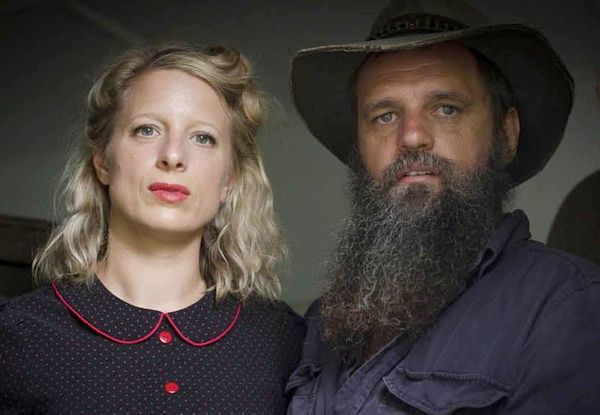 From oceans apart HatFitz & Cara Robinson met in a tiny pub in Ireland in 2007, immediately felt the attraction and became partners in life, as well as music. Cara is "A County Down girl" from Northern Ireland, while Fitzy was born in Cronulla, NSW and later moved to Queensland. Fitzy and Cara now reside on the Sunshine Coast in the State of Queensland, Australia.

Blues meets Celtic aptly describes this duo, with Fitzy dressed in singlet, shorts and bare feet, singing in a deep, gruff growl while playing raw blues on his small resonator guitar, which is made from Brass bell by Greg Beeton in Australia. He also has an electric Japanese made Tiesco, that he describes as "a bit of a beast to play." Cara, in direct contrast, sings with an angelic voice. She is a softly spoken, neatly dressed Irish lass who sits astride a drum kit adorned with colourful flowers playing flutes and whistles, including a Fife. Add to this a washboard, played with black gloves stretched over delicate fingers, adorned with metal thimbles and the package is complete.

Cara began playing drums after she met Hat Fitz, while he was performing in a duo at the Castlebar Blues festival in Country Mayo in 2007. "I was blown away by Itchy’s drumming technique and had always been curious as to percussion and drums throughout my musical career. I played percussion for four years before I had this immediate urge to play kit, and didn’t think that I would be playing drums with Fitzy at all when we first met. I set up a rough small kit in my living room in the Ceilidh cottage in Ireland and practiced to, believe it or not, Howlin Wolf and Hat Fitz and Itchy, as I was so inspired by these guys at the time.

While Fitzy says that he does not play a particular style of guitar, he "is partial to playing a few rag tunes. Banjo would be old time claw hammer." While there are many different styles and influences, he says there is a strong pull towards the hill style country Blues playing technique. "I have created my own trademark when reaching a certain climax in a song. I call it the Flurry, which is a vigorous triple fingered up and down stroke. I notice a few of the younger boys around the traps have taken to it also, which I suppose is a compliment."

Fitzy’s earliest musical influences were Australian country Western; Chad Morgan, Slim Dusty and Smokey Dawson, while Cara’s influences were Hank Williams, Lead Belly and Janis Joplin. While their stage and recording repertoire includes the music from traditional artists, such as Jessie May Hemphil, Blind Willie Johnson, Fred McDowell, and others, they also perform many of their own tunes, and in fact their recording, Wiley Ways, are all originals. "There are inspiring moments in every corner you turn. Some songs have a mind of their own and you are simply the vessel in which they choose to manifest themselves. The ultimate feeling is when a song you have written makes a connection with a complete stranger – where they feel something, whether it be sadness or happiness from listening to your song. Whether it be the chords or the lyrics, or simply the groove, then you know you’ve done good."

HatFitz & Cara Robinson regularly play each year in Canada, UK, Ireland, Europe, America and Australia. They have played and recorded with many well known Australian performers, such as Jeff Lang, Ian Collard, Suzannah Espie, Mick and Jim Conway, as well as UK’s Corinne Bailey Rae and Gibralta’s Kirsty Ameida, to name a few.

This duo represented the Blues Association of South East Queensland (BASEQ) for the IBC in Memphis in 2015. They declared: "It was an honour to represent the South East Queensland Blues Society for the IBC and we were welcomed with open arms into Beale Street, where we played BB Kings Bar and the Juke Joint, along with a spontaneous moment joining Watermelon Slim on stage at Big Red’s Juke Joint in Clarksville, up the road from the Cross Roads. The calibre of artists at the IBC was high, so it was a buzz to make it to the semi finals."