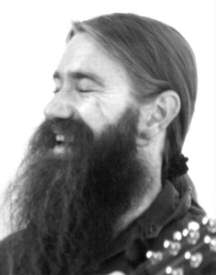 "I was born, and raised in ..." well Ipswich I suppose. But me being a RAAF brat and with the family hobbies of gem fossicking and showing dogs, the travelling that this entailed was always accompanied by tapes of '60's pop songs, what I used to call 'Australiana' (I've still got a purloined Lionel Long LP), and Dad's (in hindsight somewhat idiosyncratic) recordings of road runner from off the tele - orchestral music bite; sound effects of rock falling very long distance; Beep! Beep!; more music. These and the wonderful Sing Sing Sing sessions with ABC radio at primary schools (I managed five) constitute some of my earliest musical memories.

In the year prior to returning to Ipswich due to Dad's ill health, I have these vague memories of Mum driving me across Melbourne once a week for National Boys Choir preparation school. (We left Victoria just before the 12 month training was complete so I'll never know if I'd have 'made the grade' - possibly a good thing, that). Looking back, the teenage years seem a whirl as mum kept us three boys (& herself) busy with a mixture of music, sport, scouts, and art. Beth, I don't know how you did it all but thank-you so very much. It certainly gave all us boys very broad options for the future.

A bursary to a local boys school was a mixed blessing with the music department being the only 'safe place' for a boy who played soccer, not rugby, and thought that standing in the middle of a field in summer was only for mad dogs and a certain immigrant population.

Playing keyboards in the rhythm section of stage bands helped widen the field of musical appreciation but better still were the yearly combined musicals staged with the local girls school which meant months and months of visiting the 'sister school' for afternoon rehearsals. I couldn't understand why there were only ever half a dozen or so boys interested 'cause it certainly seemed a better option to my mind than 5.30am swimming or rugby training. A love for the musical theatre tradition was furthered through years with the Gang Show and community musicals. There was also Front of House sound work, and arranging and conducting a combined Scout/Guide concert band - phew!!

Leaving high school, home, and Ipswich I took the opportunity for what turned out to be the last year of free higher education in this country. Studying at UQ to become a music teacher gave a reasonable grounding to musicology (history, theory, composition etc.) but rather heated arguments over ways of teaching music in our society (and an insight into how the Education Dept' operates) led to my not taking up this option after graduating. Being a young one in Brisbane in the late '80's did, however, have it's benefits; 'Brisburg' having one of the strongest indie band scenes at the time. Working with community youth Radio 4ZZZ, and three years spent playing, touring, and (a little) recording with Who's Gerald? (later Custard) brought me close enough to 'The Industry' to make an informed choice not to go there. Whoever gave me the advice at that stage that music can be a good walking stick but a poor crutch has my sincere thanks.

Having turned away from teaching and performing I completed some further studies and ended up as a music librarian with the State Library of Queensland. This professionally pleasant time brought me in contact with a huge diversity of music (I delved into the early music section with particular glee) and lasted a couple of years but was not, unfortunately, permanent. The 'recession-we-had-to-have' and friction like how the last of the budget should be spent - on the Phillip Glass back catalogue or on finally replacing the Led' Zep' music book that had been missing for five years and requested six times every week didn't help.

What did help keep me sane during these disenchanted times was the group of very good friends who would gather on Tuesday nights and sit around either remembering how to play, or teaching themselves, an instrument. Someone had a battered copy of Begged, Borrowed, and Stolen for some tunes and the songs that were written by these `beginners' - well!!. We had immense amounts of fun just doing what we were doing but had never heard of the term 'session' in regards to music. It was here that a second-hand mandolin appeared in my hands and we've not let anyone have any peace since.

It was somewhere around this time that IT happened. Some good friends had been prodding me about this 'folk scene', but it was walking into the beer tent at a Mediaeval Fayre at Mowbray Park that cemented it. Here were all these people, just sitting round, and playing tunes - It just made so much sense and I was totally transfixed. I was so naive at the time that I honestly thought that if I could play just ONE of these tunes I would know musical fulfilment! (As I've since begun to understand, it's a much longer journey). I can't re-call if I ever did get that beer.

Well, It's been all (wonderfully) down hill from there. Being able to play (in the fullest sense of the word) and have fun with line ups like Celtastrophe and Baldrick and the Cunning Plans (I seem to end up in bands with the silliest names); helping as a reserve with The Rogues (orange juice makes your fingers sticky); Standing with Corey O'Connell as he sings songs about his home town in his home town; and all the beautiful, amazingly supportive, and generous people I have been so lucky to meet. The Sessions. The Festivals. The parties. The kitchen tables. I can not begin to name all the people (you all know who you are) but thankyou each of you. With all the songs, tunes recordings, philosophies, and techniques that have, and continue to be, shared, I only trust that I can give (back) some of what has been passed on to me.

Today I find myself back in Ipswich. Still thinking a lot about music, playing some, learning a little, and enjoying it all immensely. And as Tricia and I watch 15 month old Lillian Merry dancing and clapping to what/whoever's playing, I am thinking of Rory McLeod singing "...and we're in love with the dance that never ends...."