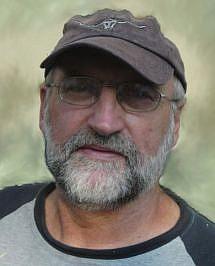 Never took up a musical instrument till I was over 40 I said one night to Jamie Whitney after a session. Yeah, he said, then you put it down and picked up a squeeze-box. What would one expect from a banjo player! One of the great mates it’s been my pleasure to meet, in the 25 years since I made my home on the Sunshine Coast.

Dad was a returned serviceman schoolteacher, Mum, a mallee farm girl with six kids. We lived at a small rural state school on the Mornington Peninsula. The local tip, a haunt for us boys, was just down the road, woohoo! So was the beach yea! School holidays were spent on the Grandparents' mallee farm, old Caterpillar crawlers and Lanz Bulldog tractors and a farm dump that drew us like a magnet.

Dad loved Australian Folklore and introduced us to the bush poets and writers, and being a bit of a wag he coaxed me at a tender age to recite The Man from Ironbark with its catch line of murder, bloody murder, for the catholic eisteddfod, much to the horror of the good nuns, who he would send us to every other year, to balance his education with a bit of religion!

My eldest sister and brothers introduced me to the 60’s folk music, being dedicated folkies of the pre electric Dylan mob, and I loved the music but didn’t sing, because Sr Mary Someone had tapped me on the shoulder during music lessons and said, You’re tone deaf lad, just pretend to sing.

And I hope they let you out of purgatory soon too, Sister!

I was earmarked for the family priest, but I wouldn’t go there, so it was the building trades and on weekends, surfing and footy, go the mighty Magpies! Lots of great pub bands, Skyhooks at San Remo Pub, Thorpie at Rosebud Rock Concert, the Sunbury Rock Festivals.

When the old man backed up his advice of, See the world while you’re young boy, with some camping gear, I took the hint and hit the road.

Nimbin after the Aquarius Festival, helping out on Tuntable Falls, I listened with amazement to those talented, vibrant music makers, thinkers and dreamers.

Went to the West, across the Nullabor on the dirt, Pilbara iron ore mines by winter, Perth beaches for summer, the Shinju Matsuri in Broome in 74 before tourists, The Roebuck Hotel and Cable Beach, long nights of music and singing, then back down to Port Hedland, Newman, Dampier and Tom Price working to get money for trips to SE Asia and India.

North Qld working the sugar mill shutdowns, and then living on the beaches, Cape Tribulation, Cooktown and Cedar Bay. Weipa for more work, always somewhere to go fishing, to camp, places to see, and the rubbish dumps to scrounge over!

I turned 25 in Darwin in 78, still living my boys' adventure, driving trucks across the top end, and when I was in town it was the folk club at the Gun Turret, the rock sitting club, music weekends across the harbour at Mandorah, the Top End Folk Festival in '78 or ‘79 at Casuarina High School.

Then in Perth in 1980 I had the good fortune to meet Linda Wandell and her sister Becky Wandell, then Bill Burvill and we all bought land together on the Sunshine Coast where I joined the folkie life and we started families.

Linda and I attended the Bucca folk festival in 86, then the 2nd Maleny Folk Festival. Assisted Becky and Bill with the Cooroy folk club, and helping out at the kids’ festival at Maleny. The pull of garbology became too great for me and I helped Doug Worth for a couple of years before Amanda Jackes convinced me to put up my hand to head Garbology.

Bill Burvill and I had bought a commercial fishing boat about this time and were having a great life fishing and drawing on the folkie scene for deckhands. Errol Collins and his brothers were always keen, Peter Auty and Griff Bignell spent a memorable weekend and a few years later I recall Peter causing a good deal of consternation amongst the local fisherman by turning up at the Tin Can Bay pub in his by then trademark kilt and boots with squeezebox to go fishing. Evan and Lyn Mathieson would love to get out of the city and inspired me with their depth of knowledge of all things folk. I was a part of the Sunshine Coast Folkie family and later on Juda Bacon would introduce me to the Brisbane mob, amongst whom I finally felt ok to trot out the old squeezebox that Alan Bannister (Banno), folkie, had left behind after he helped us build our place at Cooroy in the early 90’s.

My struggles to produce a tune, would be demoralised by daughter Sarah, then about 10, who would take it out of my hands and play perfectly by ear a tune I was sweating blood over, and her outrage when she would catch me laboriously writing down the notes below the dots, even the little kids at school aren’t allowed to do that Dad!

Needless to say, inspired by Jacko Kevans at his Woodford workshops and with the support and inspiration of lots of great Brisbane and Sunshine Coast musos, Errol Collins, Steve Cook, Bob Witholtz, Bill Hauritz and Bill Burvill to name a few, I gradually got enough tunes to sit in on the sessions, and that’s enough about my musical talents or lack of! Thick skin helps!

When Maleny became Woodford Folk Festival, garbology got serious. I found myself dealing with the waste the size of a regional town's population on limited budgets. This called for innovative systems development and Lindsay Kopittke, Dave McKenna, myself helped by many volunteers gradually developed garbology and recycling into an award winning state of the art operation.

I have been very proud to be part of Woodford; we have reached out across generations and created something of lasting value, touching on all areas of life and all folk.

The future? Living the good life in a quiet valley near Gympie, learning a few Morris tunes from Banno, and attending as many music festers as I can and handing over to the wonderful generation of Woodford kids we have raised, including son Tom, who is a musician.

Regrets? Never did get enough starters for a one legged morris side. Monoped Morris had a good ring to it. Eh! Ah well!