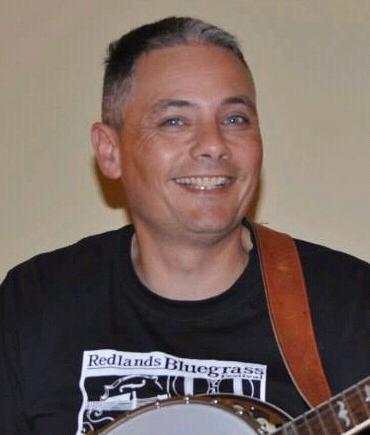 Having been born in England in 1965 I grew up in Brentwood a little town near London. My parents had wide ranging musical tastes and we played lots of music at home. My mother plays the piano, my sister plays the flute and both my parents loved to sing. Sunday afternoons often meant music gatherings at our place with family and friends, and the house would be full of people playing interesting instruments. Sometimes our family holidays were to folk festivals, and even as a small child I can remember being fascinated by the people and the music. As I grew up I tried piano, guitar and clarinet, then a family friend who played drums in a jazz band gave me an ancient drum kit. I love the music of drummers like Billy Cobham, Stewart Copeland and Neil Peart and spent my teenage years learning to recreate those sounds.

The 1970's in the UK meant punk music was everywhere and in 1979 aged 15 I started playing with a group of guys all at least five years my senior who played a mixture of everything from Sex Pistols covers to R&B. We played in a few pubs and clubs in the local area and I loved it, until someone pointed out I was too young to be in a pub and a replacement drummer was found. Undeterred I continued to play at school and with youth club bands until I left school and moved to attend engineering college near Oxford. The Oxford music scene was an amazing experience, and after joining forces with a local bass player and a guitarist we formed a Police inspired band and played the local music venues until I left Oxford in 1989.

I'm not sure if it was Eric Weissberg's rendition of Duelling Banjos in the film Deliverance or Earl's playing on a Flatt and Scruggs album I used to hear at home, but something drew me towards the banjo. In 1987 I purchased an old Washburn five string in a little music store in the city, which in turn led me to the music of bluegrass masters like Earl Scruggs, Bill Monroe, JD Crowe, Ralph Stanley and Jimmy Martin. During this period of time I met an Aussie girl who later became my wife and in 1990 we moved to Sydney. With all the pressures and delights of moving half way around the world my music took a back seat for a few years and work took over. In 1993 we moved to Queensland and after a brief stay on the Gold Coast settled in Buderim. Somewhere in all the moving my drums had become excess baggage, but the banjo had survived and continued to fascinate me.

I was incredibly lucky to move into South East Queensland in the early 1990's, and whether directly or indirectly my banjo playing was greatly influenced by the support and mentoring of three great local banjo players Peter Nahuysen, Gary Vann and Wendy Holman. These wonderful musicians I can never thank enough for their time and encouragement. Trips to the Imbil Acoustic Music festival and early Redlands happenings also gave me access to the music of Andrew Clermont, Dave Hellens, Trevor Warner, Laurie Grundy, Gary Brown and the very young Davidson Brothers. In addition, I was incredibly lucky to find Wendy Holman had moved to the Sunshine Coast and for the next few years Wendy guided my banjo playing and opened many doors for me in the local folk music scene. Gradually my searching for more bluegrass and old time music took me further afield to festivals in NSW and Victoria and eventually to the USA where I was lucky enough to be able to study with Bill Evans.

In 2010 at the Kelly Country Pick I had a chance meeting with Andrea Calwell who is also a bluegrass music enthusiast, which kick started one of my current music projects The Meredith Jam Camp. As both Andrea and I had spent many years attending music festivals we wondered what would happen if you took the wonderful jam sessions and workshops that these festivals provide and made them into a jam session focused camp? Not a new idea, but not common in Australia, so we gave it a go. In early 2012 The Meredith Jam Camp was born and runs twice a year providing structured jam sessions and instrument workshops for a full range of bluegrass musicians. We have been extremely lucky to gain the continuing support of some of Australia's top players as our camp tutors and currently each camp runs to a sell out crowd. www.meredithjamcamp.com

As a spin off from the Meredith Jam Camp and in response to a few requests from local banjo players, I now have a small and very accommodating list of students who keep me on my toes and push me to constantly look for new material. Teaching has enabled me to give back some of the support and advice I have received from numerous people over the years and I find it very rewarding.

For the last few years I have been lucky enough to be one half of the bluegrass duo The Repeat Offenders, the other half being Jane Kennedy who's sweet vocals and driving bluegrass guitar are a pleasure to play with. Our musical collaborations give us the opportunity to perform as a duo and with the addition of other local musicians as a full band, we also attend many local and interstate music festivals.
The Repeat Offenders can often be found busking on a Sunshine Coast street corner too, which has a certain raw quality and direct connection with the audience that we both love. Jane and I are currently working with the Sunshine Coast Council and Australian author Peter Watt on his latest book launch An evening of fire.

My plans for the future include continuing involvement in the folk music scene with further performance and recording projects for The Repeat Offenders. I would like to see the Meredith Jam Camp continue to grow and expand its popularity, and I have many more travel plans in search of great musical experiences to keep my playing exciting and fresh. Most importantly though I will always maintain close links with the wonderful music people I know and love, and who have enriched my life with their creativity, support and friendship over many years.