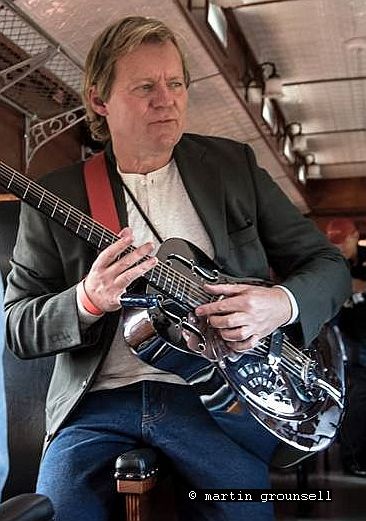 I'm an amateur musician not often found far from home base in Sandgate. I play old style acoustic blues and gospel music so I can only assume that the invitation to contribute to the Folk Rag reflects a decline in folk musician numbers, or Folk Rag standards! Anyway, having been asked (thank you) here's my story. [ed - we represent all acoustic musicians. :-) you were missing]

I came into the world in Hobart in 1955. My dad was in the Army so we were on the move continually right through my early years and school years. It wasn’t a very musical home. No one played an instrument. Dad loved classical music but I seem to recall that he wasn’t allowed to play it very often (too noisy). By the mid 60's, like everyone else, I was heavily into the pop and rock bands of the day. In early high school, my older brother Rob acquired a guitar which I would plunk away on from time to time when no one was around. It was a right handed acoustic. Being left-handed, I turned it around the other way. And I stuck with that approach right up until the late 1990s. It was very primitive but I guess the seed was sown.

Rob's record collection had a big impact on me. It included a healthy swag of the early British blues bands- John Mayall and the Blues Breakers, Fleetwood Mac, the Yardbirds, Cream and so on. A short while later, T-Bone Walker, Johnny Winter and Freddy and all of the other Kings had me trying to play blues licks. By the time I finished high school I was deeply smitten with blues music, and went to every concert performance by visiting blues and jazz musicians that I could.

Years passed of always having a guitar of some kind around the house, although I really had no ambition or sense of direction with it. Just enjoyed noodling on the side. I accumulated a large record collection of my own, and used to enjoy playing along to those and tunes on late night radio shows. I couldn’t actually play a whole tune as such. Didn't really seem to matter to me as it was all about a bit of emotional release, not for public consumption. A trip to the USA in 1984 affirmed my tastes. With a bit of sightseeing thrown in, it became a musical pilgrimage to the blues clubs of Chicago, the jazz clubs in New Orleans, and with the unexpected and unforgettable bonus of sessions in the Gospel tent at the New Orleans World Fair. It was all heady stuff!

After moving around a fair bit in pursuit of our own careers, my wife and I came to Brisbane in 1992. I hadn't progressed musically in all this time. Still in the closet. Once here, I think I spent probably a year on and off admiring some shiny steel guitars in the window of the now defunct Guitar Garage in the Valley before getting permission to purchase one. A Dobro Hawaiian resonator, nickel-plated brass, loud as. Had no clue what to do with it. Still couldn’t play a whole tune, didn’t sing. Then I had two defining moments - I met fellow Sandgate lads, the late Nigel Oliver (of the Johnson Stompers) and Tony Von Wieldt (Love Is A Blur; Five Hanks amongst others) who between them taught me finger-picking and slide guitar, and how to play the tunes I wanted to play. In the process, my strings got turned around the right (conventional) way, and I also started to sing as a sort of compensatory effort (the strategy was maybe I can get away with being able to sort of sing, sort of play).

We started hosting music events at home, and through that met other players like Mal Nebe and Wendy Holman. I think my first public playing experience was with Tony at a country hall event at Camp Mountain in 2000. Then came tentative appearances at open mic nights at the MadAss folk club, then operating out of Souths Rugby League club in South Brisbane. Great encouragement from the delightful hosts, Alison Bell and Rose Broe, kept me coming back. Having the likes of Ewan MacKenzie and top shelf folk musicians dropping in now and then to play was inspiring to say the least.

Sometime in 2002, Tony, Mark Anderson and I tentatively formed a trio (Dirt Music) and we played initially at the now defunct Seaview Hotel in Shorncliffe (for beer) and enjoyed a short but enjoyable residency at the Shorncliffe Yacht Club (for actual money). Nigel Oliver played with us too on occasions. Roots music was the focus, underpinned by the steady acquisition of appropriate instruments. We played a mix of bluegrass and folky blues with a lot of enthusiasm and with more instruments than songs sometimes. We played now and then at the MadAss in South Brisbane too, and then at the Muddy Farmer in Annerley when it relocated there. It was enormous fun. But then, in 2003, a job opportunity came up in NZ which I was keen to take and so my part in Dirt Music came to an end.

We returned to Brisbane in 2006. I had been a regular solo performer at various clubs/gatherings in and around Wellington while in NZ, and so I decided to continue on with it here. I was looking around for venues where I thought I might get some playing time, and fronted up to the Kookaburra Folk Club in Red Hill not being at all sure of what to expect, or how I might be received. As it happened, I got a very warm reception there from Anne Infante, Ian Clark, Ross Roache and others and have been a semi-regular attendee ever since. We were raising a young family at the time, so while it was all very enjoyable, the music took a backseat. Now that I'm semi-retired, though, I am trying to make up for lost time!

In terms of the music I play, I draw on a lot of the early blues, folk and early jazz influences of the day (early to mid 1900s), as well as some performers that are still above ground. Several Johnsons, a bunch of blind blokes, and some very sassy women were fundamental. There are plenty of contemporary heroes as well, such as Steve James, and local players too from all genres.

I'm tickled to have progressed from a listener to a player, and that there is an audience for what I like to do. I keep meeting great people through music. So thanks to those of you who have listened, enjoyed, given advice, feedback or encouragement. Might see you on the blues train (fb Destination Blues), the Red Hill Folk Club, the Cardigan Bar in Sandgate, or Sonny's House of Blues in the city.