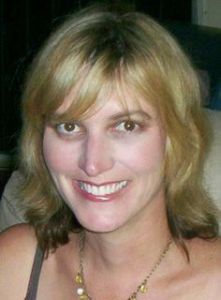 I was born in February 1967 in Mackay (I reread all of my old folk rags and most start like this) , where I lived until I was 11 years old.

My Grandmother was a speech and drama teacher and my Mother played a little piano and joined in Grandma’s productions in her youth and my Father played piano accordion and later taught himself guitar. There was always music in the house. We had a “state of the art” radiogram with a lid that closed automatically so as not to bump the record and a microphone which plugged into it so that we could sing along (Karaoke in the early days). My father had fairly wide ranging tastes and my brother and I grew up listening to Peter Paul and Mary, Simon & Garfunkel, Olivia Newton John, Cliff Richard, The Beatles, Marty Robbins, Cat Stevens, Don Mclean, Roger Whittaker, and Dad’s all time favourite, Buddy Holly just to name a few.

My first record that I chose for myself was The Partridge Family (which I don’t remember listening to very much – I think I was allowed to buy something and that was the first thing I laid my hands on). I was however, a huge ABBA fan, loved Donny and Maree Osmond , and even at a very young age wouldn’t miss Countdown for anything.

At the age of 7, I remember my parents surprising me with my own piano and announcing that I was finally old enough to have some proper piano lessons and so I excitedly began to learn piano from the Mercy Nuns who showed no mercy. I spent a lot of time in those early years practising pieces first for exams, and if there wasn’t an exam, there would be an eisteddford to get ready for.

If we did have any time for fun pieces, they were taken from the ABC SING series of books released each year by the ABC and which I didn’t realise at the time were used as a tool by schools for a weekly radio program which teachers could tune into with their class and learn a wonderful range of songs including popular hits of the day, Australian Bush songs and Folk songs, tunes and dances. These books are still published each year by the ABC and I am proud to say that I still have many of the early ones in my music collection and refer to them from time to time. Another of my prized possessions in my music collection was my first purchase from the book club at school with my own money. It was called Pint Pot and Billy. It is a great little book with many traditional Australian Folk Songs in it. So I would have to say that those books and the music we sang and learned at home are some of my earliest memories of folk music - the oral tradition, I am happy to say, is still very strong and there was never a question of not participating

. We moved to Brisbane at the beginning of 1979 and after stopping and starting a number of times I completed my 8 th grade AMEB piano and 7 th grade AMEB theory at the age of 21.

When I was an older teenager, I started to explore popular music and as a child of the eighties, I immersed myself in it to the point that not long after I left school I had an opportunity to join a top 40 covers band. The man who was to become my husband (Patrick Burke) was the driving force behind this band and we worked very hard around Brisbane with a smattering of short tours through central Qld before calling it quits a couple of years later. My playing background to this point had been mostly classical, so to play popular music and share it with others in a performance capacity was very exciting to me.

Fortunately, Patrick and I stayed together and were married. Seventeen years and two beautiful children, down the track and he is probably still one of my main musical influences and most certainly the main reason I play any music at a performance level.

During our early years together, we put together a number of bands always focusing on earning enough money to record our original music. We joined up with Tina McCarragah (Tina Louise) called ourselves Late Edition and started writing in earnest and recorded a couple of albums.

From about 1994 onwards, Folk and Acoustic music have become a major feature in my life. A number of things fell into place around this time which set me on the path I travel today. About this time we moved to a farm at Thornlands and decided to indulge our passion for recording. We converted an old shed into a recording studio and Soundshed Studios were born.

It was around this time that my involvement with Bay FM began after a meeting with Colin Nightingale to arrange for Late Edition to appear on Acoustic Harvest. A couple of years later saw me join Colin as his offsider on his weekly radio show where I gained a greater knowledge about the depth of Folk Music as well as having heaps of fun.

One of the highlights of 1996 &1997 was co-ordinating and recording Gathering Thyme and Thyme by the Bay which featured local artists performing traditional or original music. I met some wonderful people putting this project together many of whom we are still in contact with.

One day that stands out like a beacon, was my first visit to Woodford. It was the first year of Woodford and we didn’t really know what to expect but were blown away by an afternoon spent in the Troubadour Wine Bar watching Artists who were performing off the Blackboard. Shane Howard was one of these performers and from then on we couldn’t get enough of the Festivals. We then went to Palm Creek (Townsville) and heard about another festival near Mackay called Wintermoon which we promised ourselves we would visit. The year 2000 saw us at Wintermoon and we now go there to run a stage each year in May.

A relatively new project that I am now involved with is committee member for Folk Redlands which has been a pet project for a few, for a off the ground.

I am also performing with Shiver – a three piece women’s group with 2 friends Julie Minto and Vicky Macdonald and I perform occasionally with Thornlands when family commitments allow (that means if I can get a babysitter).

On a personal level, the future of music in my life is very exciting to me and one of the things that gives me great pleasure is to see the enjoyment my children get out of the sharing and participating in music and the friends that we have met and continue to meet along our way.