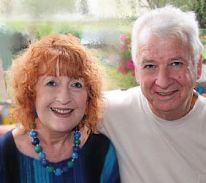 Our names are Howard and Betty Elmes. As a husband wife team, we have hosted bluegrass music jams at Closeburn between 2 to 4 times a year since 1983 and have now been asked to write a small piece on them.

Sometime during the 60’s, Betty developed an interest in folk music engendered by all the luminaries of the time…. Peter, Paul and Mary, Donovan, Dylan, and Joan Baez etc., which in turn led to her purchasing a Yamaha nylon string guitar and teaching herself to play. By chance, a woman with whom Betty worked mentioned a man named Stan Arthur whom she knew and who ran something called The Folk Centre in Ann Street. During the late 60’s and 1970’s we began going to The Folk Centre and were introduced to the live Folk Music scene in Brisbane over a delectable supper of tinned spaghetti on toast.

After moving here to Closeburn in 1980, we met people with whom we established friendships. Some of these people introduced us to Bluegrass music. By late that same year we had begun meeting every Tuesday night at an address in Highvale for “practice”, involving general socialising and too much drinking. Our hostess already was trying to learn Banjo and Mandolin and very soon I had fallen in love with the sound of 5 string Banjo and had purchased one for myself. In retrospect, picking up an instrument for the first time when already in my early 30’s was a big ask. I did achieve a level of competence sufficient to play in a band, but it was not a comfortable fit for me. I kept meeting other Banjo players who were far more competent and some just blew my socks off! I quietly retired from Banjo playing and flirted instead with Electric Bass. I didn’t stick with this long term either as it turned out, but it was certainly an easier proposition than keeping up with the lightning pace required playing Bluegrass. They don’t call them “Breakdowns” for nothing.

Betty on the other hand has always been a constant participant in playing and vocals. Although flat-picking was a bridge too far, she is a competent rhythm guitarist and vocalist. The purchase of a Martin copy Mountain guitar early on proved to be a very good buy and is popular for its tone and timbre.

After several years and the interest of our Highvale host waned a little, we took up the mantle and in late 1983 hosted the inaugural Sat. night Jam at our home, inviting a relatively small network of what ever musicians we knew at the time. The Jams were pretty much pure Bluegrass affairs in their early years, but as the ranks began to swell and musicians from varied backgrounds infiltrated (and were welcomed to), all it took was a pregnant pause between Bluegrass numbers and someone would break into a popular song of a different genre. Purists muttered in their beers, but over time a tolerance for music of virtually any style developed. Whilst from our point of view as hosts, the Jams need to maintain their Bluegrass roots; alternate genres are also welcomed within reason.

Exponents of Jazz, Blues, Spanish Music, Irish, Folk, Rock and plain ol’ Country have all assumed “centre stage” at times and we believe Jams are all the richer for their input.

There is a core group of talented musicians who it would be fair to say are the lifeblood of the Jams and to whom we are ever indebted. Many have scarcely missed a single one. Equally important is the ever-changing rotation of new artists who have been invited, mostly by core members who recognize that they would be likely to fit in and enjoy themselves. This gives lifeblood to Jams and ensures that every single one is an entirely different experience.

The Jams always take place in a room constructed for this purpose, but because we have a venue of limited capacity, it is necessary to keep this arrangement of “by invitation only” in place. It is a system, which has proved its worth also. Over the entire 30 plus years I cannot even recall some much as a raised voice. The only injuries I can recall are bruised egos, and whilst they might be unfortunate, they are not normally life-threatening. We have derived enormous pleasure in hosting these Jams and feedback has always been extremely positive from participants.

We would dearly love to identify musicians who have attended over the years individually, but we soon came to realize the offence we would incur by accidentally omitting to mention someone. It would be an impossibility to remember everyone, so we think it best to not mention anyone by name at all.

While most attendees are every day amateur “musos” many of whom regularly can be found at “The Bug”, a handful are more recognized names who have since made a name for themselves in the recording industry.

It has been a wonderful thirty years and circumstances permitting, we hope to continue hosting these Jams well into the foreseeable future.