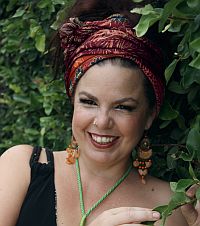 I have always had music in my life. I grew up in Bendigo, with a dad who was (still is) a musician. Band practices in my lounge room, going to gigs with dad & us kids travelling in the back of a white van painted with 'Captain Blood's Funny Buccaneers' on the side made for some great, whacky childhood memories. Singing has been my passion since I was a little girl, and the music of my childhood played such a huge part in me loving singing..the Beatles, Boz Scaggs, Steeleye Span, Joe Cocker, Leon Russell, George Benson, Steely Dan, Sherbet, Little River Band, Earth Wind and Fire....anywhere I heard great singing, harmonies or grooves, I just wanted to be in that band! For a little while in grade 6 I wanted to actually be Marcia Hines, and I kept trying to put on shows and organise people to play roles and sing parts, (who'd have thought?). And while I had a crush on a Bay City Roller, my teacher was super-stoked that I turned up to the grade six dance with the Best of the Doobie Brothers LP to play instead of Sean Cassidy!

I love musicals and being in choirs. A lot. I performed in many throughout high school in Bendigo, then in Brisbane, and have sung with some wonderful choirs as a grown-up too; Qwired, Madding Circus and The O.K. Chorale, as well as honing my craft through years of street-theatre performances with The Flying Ezmereldas and The Super Supremes ...a sure way to learn how to handle a crowd! For the past 13 years, I've also worked for a great organisation, Musica Viva in Schools, which tours groups around Australia to perform in primary schools. I've literally travelled all over the country with my partners in song, Leah Cotterell & Barbara Fordham, taking live music to children in indigenous communities in the Kimberly, and through all of regional Qld, much of NSW, Victoria, W.A & N.T. It's incredibly hard work, but infinitely rewarding. Through some of this time I was also part of the Worldly Women collective, initiated by Donna 'Fati' Miller, recording songs for two compilation albums, and touring & presenting main-house theatre shows, and was also part of Women In Voice 11 at QPAC.

My first forays into singing with bands came via the burgeoning blues scene in Brisbane in the mid-late 80's when I worked at the Port Office Hotel, and frequented the Bombshelter at the Story Bridge Hotel. Over the course of a few years I was invited to sing with some incredible bands, and given opportunities to perform with the likes of David Bentley, Phil Manning, Buzz & the Blues Band and The Hipshooters. I joined The Flannelettes at Li'l Fi's invitation, and sang with them for 10 years, supported through two albums, festival performances and concerts by a truly loving and dedicated audience. There is something very, very special about singing with a group of strong, beloved women, and those times remain precious to me.

I even had my own blues band for a little while in the early '90's, loving it, but learning along the way that although I was doing what I wanted to do, I wasn't really connecting to the music. I felt like there was something else I wanted, or needed to do, or find, that would let me freely express who I was. Through all of those years, I worked in pubs, behind the bar, and then in the kitchen, where I learned some great skills & ended up cooking in a pub bistro for a year or so, finally ending up in retail & back to hospitality just before I took the leap to full-time performer. It wasn't work I loved, but I was good at it, and I learned a lot about people along the way. I wanted to sing so badly, but didn't really know how make a proper go of it.

I met Kym Ambrose in September 1994 when he was touring from Sydney with some old friends of mine, and my whole perspective on music shifted so significantly that I could feel the course of my life change during our first week together. The music he shared with me made me feel something I'd never felt before: connected. Connected to something so beautiful, so strong and meaningful, that when I conjure memories of that time, 20 years ago, I still experience an overwhelming sense of joy and wonder at the power of my reaction to hearing Brazilian music for the first time. It was our soundtrack. Those feelings are bound inextricably with falling in love with Kym, and I adore that we found each other through music, and that our relationship grew as we explored it together.

I finally knew: This is what I'm supposed to do.

I can't tell you anything specific about what called me to Brazilian music, because it was everything. Everything I'd ever wanted to sing, everything I'd ever felt about loving music was here, everything I ever had to say through music, I could do in this place. I didn't know or understand the language, but that wasn't a barrier to me. I find Portuguese to be the most beautiful language to sing in. I'm comfortable and at home with the sounds and the rhythms of phrasing, and I don't think I'm ever more open, than when I'm singing in Portuguese.

When I quit my day job and committed fully to life as a performer, I had just joined Credo (1996) as backing vocalist, with the amazing Ewan MacKenzie and Karen Anderson (we met when I studied acting for two years straight out of high school, and we'd done some outrageously fun rock-musicals together for Toadshow). We had a two year residency at The Healer, and The Travelodge Jazz & Blues Bar, and I did loads of gigs, learning so much from the great musicians I was working with. It's also when I started adding percussion to my repertoire because I didn't want to be one of those backing singers who just stands there in between the singing bits! Playing percussion has since become an integral part of what I do.

Throughout this time, Kym worked as a freelance musician and ended up drumming with Credo, and with Leah Cotterell's 18 Wheels, where some of the best jazz musicians in the city played country and gospel music for the sheer pleasure of it. This opened up another wonderful and supportive world of music-makers for me to play with and learn from.

And it did, when in 1998 The View From Madeleine's Couch was born, two years after Kym and I married. The only Brazilian musician in town at the time was Jaider de Oliveira, who helped me immensely through the early years with pronunciation, translations and lyrics.

Across three trips to Brazil, where I've lived for a total of nine months, the recording of five Madcouch cds, constant gigging, some touring, heading festivals, being nominated for, and winning music awards, playing on little stages at community festivals, playing a concert tour of Brazil, or in the corner of someone's lounge-room or at their wedding, I have shouted to the rooftops my love of Brazilian music, and what it means to me. Nothing much has changed, really. After 16 years of doing this very particular thing, I still love it, and feel like I have something more to give. I don't know what it is, and there are times of flux; moments of wondering how much longer I can sustain this, how much longer will people be interested in what I do, should I try something different, and when, oh when will I find the right moment to connect with the words and melodies I know are still floating about my head, waiting to come out?

I continue to work with Barb & Leah on the schools touring, as well as doing a range of freelance event & festival producing for Brisbane City Council, plus working on my own independent community event, the Saideira Brazilian Festival. I think I've sung on about 20 albums for other musicians, (because deep down, I still love bringing some harmony to the people!). I've managed mine, and my band's career with something akin to blind enthusiasm and a sometimes misplaced faith that everyone wants to do the right thing.

My musical Madcouch family is extensive. I've been a very lucky woman to have worked with such incredible musicians throughout the life of the band. Our bassist, OJ Newcomb, particularly, whose huge talent and enormous heart have contributed greatly to the band's sound and success, as has our drummer of 12 years, Mark Henman, (who is so in demand now that it's been a year since we played a gig with him!). Along the way, the early contributions of Peter Walters, Sam Bates, Barry Sutton, along with our long-time guitarists Bruce Woodward and Jamie Clark, and our rhythm-section-wonders Helen Russell, Andrew Shaw, Andrew Johnson and Paul Hudson have meant that we're never without an absolute cracker of a band.

But most of all, my success, my passion and my motivation has been driven by the great love and the incredible life I share with Kym. We've climbed musical mountains, hit some lows that we've always managed to pull ourselves out of, and his faith in me, and what I'm capable of, has never waivered. Nor has that of our fans, some of whom have stuck by us since the very beginning. Some, in fact, who have known me since I was singing the blues 25 years ago.

This thing I do, I do because I must. I know how to do some other things, but nothing gives me what singing does; those completely unquantifiable moments when, no matter if you're singing for 10 people or 1000, you throw your head back, and your heart out to the world. - It's magic.