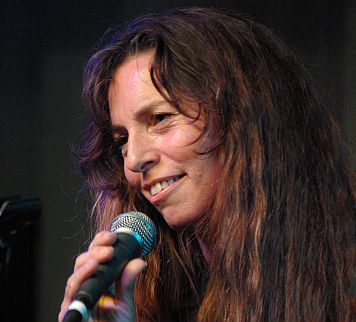 I was born in Toowoomba in 1967, and soon after our family moved to New Guinea where my father, an agronomist, managed plantations. We were there for 4 years until we moved back to Coolangatta where Mum taught, and then onto Mullumbimby, where we owned a banana plantation at Upper Main Arm. My father was an Indonesian who cooked amazing food, and brought home anyone who needed a place to stay and a meal. Our house was always full to overflowing.

My mother was a speech therapist and music teacher who worked in the theatre. My earliest musical memories were of the lullabies my mother wrote in New Guinea. Mum played the organ in church, so I was exposed to a lot of sixties gospel music as a child. During my years growing up in Mullumbimby there were monthly moon dances, lots of alternate music, bongos and guitars everywhere we went, with an Aquarius Festival in there somewhere as well, just to keep things interesting. We didn’t play records much, and I wasn’t schooled in band names and music trivia, but music was everywhere every day. We always had a piano in the lounge and various other instruments strewn about the place, it was never very long before someone was singing again.

We moved to the Gold Coast after my father died, so my mother could go back to teaching when I was 10. I was never really comfortable at the Coast missing the idyllic life I had left at Mullum’. I only sang in Church with any confidence. However in my room I listened to Leonard Cohen and wrote sad poetry, as teenagers will.

At 17 I moved with my Mother and two brothers to Kingaroy. Here I met my lifelong friends and grew into myself. I was exposed to Iggy Pop, early David Bowie, Brian Eno, Ricky Lee Jones, Joni Mitchell, and the Junkyard Dogs. The Dogs were a local band who I became acquainted with through some young teachers Mum knew. This was when I met my singing partner, Grant Jeppesen. I also met a chap called Peter Yappa, who introduced me to Celtic music. We would sing the harmonies of Steeleye Span, the Dubliners and the Corries, it was my prelude to singing in public, albeit very softly and very inebriated at parties. Years passed, I had twin boys at 23, that slowed me up a bit, partners came and went; moved all over the place until I landed back in Kingaroy.

Here I was at 32, twin boys of 7 years and a brand new baby girl. Grant had just returned from a wonderful trip to Ireland, visiting our friend Pete, who had relocated to the land of his dreams. Grant and I decided to have a go at Celtic music and formed a duo called “Raglan”. We sang Steeleye Span, Christie Moore; etc Grant knows all the names. He ‘inspired’ (read ‘made’ - I am such a lazy musician!) me to learn the whistle and bodhran, whilst Grant played the bouzouki, mandolin and guitar. We practiced for 6 months then started getting gigs locally and at Bundaberg and Hervey Bay. This was when we started hanging out on Saturday mornings at the Story Bridge Hotel and meeting all the lovely people in the Brisbane Folk scene. Honestly I was so shy and nervous, I barely remember those days. I was in awe of everyone!

Over the next 5 years or so we added Rayner, Grant’s brother and a series of guitarists to Raglan which then became more of a Band. We grew a bit rougher, with the brothers together again, and started thrashing out the Pogues, and doing some full on jigs and reels. I tenaciously hung on to my few ballads, which gave the boys a chance to catch their breath during a gig. We eventually ran out of steam as we all got partners and jobs. We were much more inspired, and committed when all we had was music.

After a years respite in Hervey Bay, I returned to Kingaroy and Grant and I reformed our duo, since named “Lazy Sunday”. We concentrated on performing at Wineries, restaurants and sometimes pubs. The idea was for easy listening music and a more mainstream gig. We concentrated on sixties and seventies duos, as well as the classics, we kept some of our folkie faves and anything that had a strong vocal and interesting guitar. Grant has always been on a quest for the perfect song, and is quite adept, after all these years, at judging if something will work for us. He is very much the brains behind the scene, the proper musician. I do feel like a bit of a fraud at times, not reading or studying music, although I have genuine passion for the art of singing and storytelling through song. Dramatic, Celtic ballads remain my constant favourites. My interaction with the audience is as important to me as our performance.

I also have nothing but admiration and gratitude for the musicians, we have come to know and love over the years. Maidenwell Gathering has been the catalyst for us to know everyone on a more intimate level, being our local hangout.

Over the last two years we have performed at Maidenwell Hotel, on the last Sunday of every month. We also share a monthly gig with Grant’s brother and nephew, Rayner and Stephen (better known as Joey Fitzroy) at the Kingaroy Hotel. Our music has morphed into a fusion of Americana/Blues/Folk. We like to play music that leaves you feeling happy. We have just made our first foray into the Brisbane scene, doing a blackboard set at the BUg and look forward to deepening our connections here. We are hoping to make a CD this year, now that Grant has written his first original.