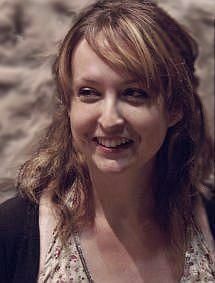 With a Swiss Mom, an American Dad and Australia now the 4th country that I’ve lived in, I’m somewhat of a world citizen. My childhood was spent in Switzerland and the USA, some teenage years in the Czech Republic and, upon reaching college age, I also lived in England. My home was bi-lingual, and many people say I sound a bit Irish, although I’ve never been to Ireland... There’s a family legend that a great, great grandmother was probably Irish, but no one knows for sure.

My parents were both musically talented and performed regularly when I was an infant and would always take me along. They performed all kinds of folk songs - traditional, modern, popular, and also a lot 60’s songs - Joan Baez, Bob Dylan, Crosby, Stills, John Denver etc.. And as soon as I could carry a tune, they put me up on stage to sing my own solo. When I was 3, I would fearlessly stand on a chair and sing the spaghetti song, which, (loosely translated from the Swiss-German), goes like this:

I look like a hobo, and I don’t have a bed
I don’t have a house, what I want most in the world is just a plate of spaghetti!
While others are busy doing things, like reading, writing or working,
I can’t work at all, because my mind is only on spaghetti!

Of course, we had a lot of music in our house – my Dad wrote (and writes) wonderful songs and my Mom has a beautiful, natural soprano voice, somewhere between Joan Baez and Judy Collins. In Kindergarten, in the States, I sang in a choir but also was exposed to a lot of great children’s music. (If you’ve got kids, by all means go buy the Red Grammer CD’s. He’s been well-known in the States for 30 years - totally focused on kids, with songs that are both entertaining and educational, and a great, performing singer himself, with award-winning and Grammy-nominated CDs).

Along with all the folk music, my childhood was also filled with classical music and songs from musicals, (not to mention all the Disney tunes), many of which I still know by heart.

When I was nine we moved from the States back to Switzerland, and language was a problem – I had to re-learn German and basically withdrew into the pastimes of drawing and singing for a couple of years, until I felt secure again in the native tongue. I had already been playing the recorder, but then began with violin. I had fallen in love with this instrument at age 7, while watching a live performance of the Nutcracker Ballet back in Michigan.

When I was ten, I also was a member of the local, Baha’i Children’s Choir which provided me with my first experience in a recording studio. We made a professional cassette recording of children’s songs. I had my own solo and it was a very exciting experience for a little girl.

Thanks to my Mom’s great voice and her also being a self-educated choir director, my parents again became popular, local musicians in Switzerland, and I was often performing with them, either in choirs, at weddings, funerals, shows for American tourists in various hotels, or at private parties. When I was 15, I took a year of classical voice lessons and even received opportunities to sing solos with orchestras performing in central Switzerland.

After some nine years on the violin, my urge to sing inspired me to replace it with a guitar. I very much regret having stopped but it was about this time that I moved into a school dormitory (where my parents were employed as house-parents for 45 youth from 30 countries, at an English boarding school in the Czech Republic) and felt that the violin would annoy the other dorm students.

So, I began guitar lessons and the first song I learned was The Banks of the Ohio.

After learning the basics, I gave up the lessons and started teaching myself. Songwriting soon followed, and opportunities for me to sing my own songs at my school assembly meetings and other student events were often coming my way.

In 2003, I encountered the Frank Theater Company, of Brisbane, ozfrank.com, which was touring Europe and allowed me to join their training at my school in the Czech Republic. I was so impressed with their training method and their actors' skills on stage - I knew that I would one day have to train with them in Brisbane. So, with only a high-school degree in hand, I returned to Switzerland on my own and began working at odd-jobs, cleaning offices, cashier at McDonald’s, working shifts in a credit-card factory… to earn my way to Australia. But I soon figured out that higher education would enable me to earn more, and also make it much easier for me to support my artistic pursuits and dreams. Brisbane would have to wait until I completed university, with a degree in primary education.

In college, among other things, I composed and staged a well-received musical for 40 kids, took piano lessons and joined a university band, which performed and also recorded some of my own songs.

During this time I also got a small part singing and dancing in Teddy’s Secret - a semi-professional musical put on at another college - from which I learnt a lot. All the main roles were filled by professionals, and during the two-week run, over 6000 people attended. I especially enjoyed the work in the studio, recording the CD soundtrack.

At the same time, I was a lead-singer and songwriter for a band called Birdie Num-Num, which received a good review in the press, but this did not last for long, because all the members lived too far away from one another and regular practices were not possible.

One of my college semesters was spent in England, where I was an assistant teacher in the Eastbourne area. They asked me to produce the annual Christmas play which involved over 100 kids. So, I wrote a new musical, with 5 main songs and six acts.

The whole school, over a period of eight weeks, got involved, and the production became an all-school effort. Just before leaving for Switzerland, I was told that efforts would be made to get the musical published for use in other schools in England.

If anyone reading this is in need of a very fresh approach to the nativity story, please feel free to contact me. The positive response in England was unexpectedly encouraging, so I’m happy to offer the play to any schools in need of a new, musical Christmas story.

Back from England, I began teaching -at last earning some real money for the trip to Australia! - and was asked by my school to attempt producing Mozart’s The Magic Flute with all the pupils. This was quite a challenge. As luck would have it, my own Mom took on a job at the same school, so she taught the choir and I taught the soloists.

I painstakingly transposed all of Mozart’s score for guitar accompaniment - and learned a lot of weird chords that I’ll probably never need again in my life - and the kids sang all the parts themselves. The opera was quite a success.

Since people in the area knew that I was singing and songwriting, I was invited to be the opening act for a large, open-air production of Romeo and Juliet, which was put on last summer by a well-known theater-group in Switzerland.

My last performance before coming to Australia, last September, was a project called Message of Music. A bunch of folk musicians got together to collect money for hearing-impaired children, in order to finance a one-week camp where hearing and deaf kids could work and play together. Because I was soon to be leaving for Australia, I was happy that my parents were also invited to join the group - my Dad on guitar and Mom teaching the choir. This project was a lot of fun. One of my own songs was arranged with a back-up of some twenty musicians (instruments and choir) and this was amazing for me to hear. Although the concert was free and not widely publicized, over 500 people showed up and donated more than enough to finance the camp for an entire week.

I first got in touch with the Brisbane Folk-scene last October. One of my friends in Switzerland hooked me up with her friends in Brisbane, so we had coffee together. I mentioned that I was interested in getting involved with the local musicians and got an email a few days later encouraging me to get in touch with Michael Bourne, (of the Folk Rag), to find out what was going on. I wrote him on a Wednesday night and got an answer Thursday morning! He let me know that there was an open microphone at the Muddy Farmer´s, MadAss folk night (thank you, Michael!). I was excited to sing again, and even though I hadn’t been practicing much during my first month in Brisbane, I figured I could probably manage a song or two.

Unfortunately, it took me a two-hour bike ride, (guitar on back), to find the Muddy Farmer! Tired and sweaty, I finally arrived, ate some dinner and asked Mark Smith, who was providing the sound system that night, if I could sing something.

Even though nervous, (new girl in town…), it was great to be singing for an audience again. After I finished, I sat down to chat and to get to know some people. But then John Holmberg, of the Pirate Brides (I look forward to hearing them play!) came over and asked if I’d be willing to fill-in for a group that had not been able to make it that night. Foolhardy as usual, I agreed and soon found myself back under the spotlight.

Actually, (being somewhat of a perfectionist), I was frightened to be performing without having practiced - and made more than enough mistakes. (But there is a saying which says that anything that doesn’t kill you will make you stronger!). Grateful for the kind and forgiving audience, I returned the following week to sing again - and was very impressed by the amount and quality of the other, local talents!

I talked to John Graham, of Murphy´s Pigs, and found out they were playing at an Irish Club, the next night. I went to hear them and bought their CD. My opinion - they’re definitely worth seeing and hearing if you get the chance! The other day I jammed with some musicians called the Curbside Pickups, in the City Farm area, and I've been to one Saturday afternoon jam-session at the Muddy Farmers. So, these have been my Brisbane Folk Music experiences until now. So far - great!

While still sorting out the unexpected difficulties in getting my Swiss teaching certificate accredited in Australia, my plan for the immediate future is show up at the MadAss events every Thursday night (hope to see you there!) to get to know more people and to work on performing some songs which I am currently learning from old records. Like other developing artists, I enjoy being able to support and contribute to the local folk scene and hope very much that opportunities to become more involved will appear.

My goal for the future is to become more experienced, more professional and, eventually, to earn a living with music and, of course, to learn some Australian songs!

Please feel free to contact me if you are in need of a singer/songwriter.