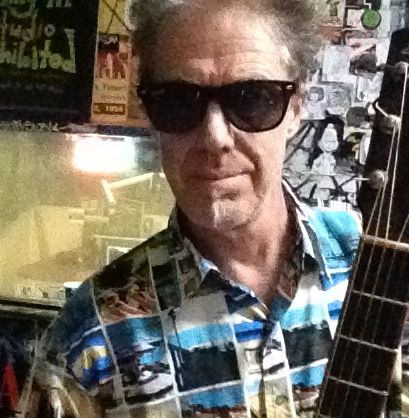 Stomperoo (alias Roo Friend) is a journeyman musician who spent most of his career playing guitar on club cabaret stages and in orchestra pits. I asked him where it all started:

"I got into ukulele as a kid then into guitar, and met the unlikely named Chris Christofferson at high school, who was an musical genius from Utah. On one day in 1970 at age 13 he played me “Purple Haze” on a Strat, “Sunshine Of Your Love” on the drumkit, “Martha My Dear” on the piano and blasted me with “In A Gadda Da Vida” on the biggest stereo I’d ever seen. It was a religious experience. He was a nice guy, and I’m still in touch with him. He, myself and another band member all washed cars for 6 weeks and we bought me a bass guitar, made a rock group (Stone Grape) and I’ve self-medicated with live music since then. Most of my family told me becoming a musician was a waste of time…so I went for it. I've done everything… played guitar behind Elvis impersonators, jugglers, comedians, strippers… a guy in a tux who cut his wife in half onstage with a chainsaw. Magic at its misogynistic best. Then I decided to quit that scene and get into the music I love… blues."

Stomperoo sings blues songs with a difference, about architecture, traffic and crop rotation. Why?


"Nobody else does, the subject matter isn't marginal, like a lot of folkloric blues. Example: '… my baby left me, so I shot her.' We don't live in that society… yet. I don’t want to glorify that stuff. So I write about things that are relevant to my life in Australia, you know… depression, terrorism, junk food, politics and so on. I'm trying to get a reaction.”

"Does it work?
"Probably not."

"What about love songs?

"Why reinvent the wheel? Leave that to the romantics. And there's no fun in it. In the end, love songs get mouldy unless you’re Joni Mitchell."

Was he pulling my chain?

"Come to the show. Then you'll understand. Stomperoo is my attempt to crossover on blues, jazz and folk… to a listening audience. And if it's possible at all, I'm an optimistic cynic. I'm playing a baritone hybrid guitar which as far as I know is my own invention. It's fretless under the 2 bass strings and it's got a dark and mellow sound with the character of a double bass and percussion that I create with my hands. The sounds I’m trying to emulate here are Jaco Pastorius (Weather Report, Joni Mitchell) and up higher I hope I sound like Jimmy Vaughan (Stevie Ray’s brother), Wes Montgomery and Clarence Gatemouth Brown.

"I write about social issues; our beautiful country, the environment and the greed that threatens to destroy it. With humour I hope. And some personal things that perhaps others can relate to. I hope you like it anyway."

Stomperoo performs with Jack Du Voisin on sax, and occasionally with Jim Toomey from The Tourists (Annie Lennox Band) on drums and has a CD release: Thinking Man's Blues.

“These guys really know their stuff musically, and it’s great to note that the lyric sentiment of many of these tracks embraces the kind of episodes we can all associate with in this world, from the caring about others on the planet, to those that have a melt-down if they don’t get enough latte in their café. I find this collection of tunes to be a cheeky look at the blues with pertinent stories being told. These guys haven’t wasted a good opportunity to make sure they get the message across. A well thought out and nicely played album – great listening and a refreshing take on the blues. Get it, got it, or else!! ;)”