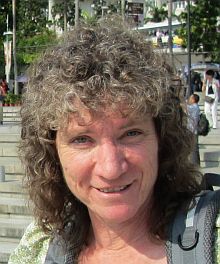 I was born in a small country town of around 500 people, Murgon, famous only for its cheese production. Growing up with 2 older sisters I became my Father’s son happy to get as grubby as possible assisting with mechanical repairs to the family car, making cement and carting bricks for building projects. Later I enjoyed sitting on tailgate of his work vehicle dropping old army kerosene flares over the side as he drove up the strip to light up the runway in Kingaroy so small planes could land at night. Somewhere in amongst these tomboyish activities I joined the church and school choirs, learnt to play the piano and participated in school musical productions. I have always loved music of many different genres. I was very proud at the age of 5 that my parents trusted me to put records on to listen to. My father’s work had a very active social club which, unlike today, all children were welcome to attend. I remember clearly 2 things, singing around the piano and one of the wives pursuing my Dad to waste a cream cake by throwing it in his face! For my 16th birthday my parents gave me a guitar which as I was involved with a church youth group I spent most of my time learning the 70’s repertoire of gospel choruses. I knew nothing about folk music.

After training to be a nurse, marrying and having 2 kids I moved to Brisbane in 1992. My sisters were starting a group, Sellengers Round, to dance English Playford dances. We had all read about the dances in Elsie J Oxenham’s schoolgirl stories. I was “ordered” to attend and fell in love with the dances. As a child I learnt folk dances at school and couples dances from my mother. The mathematical patterns of folk dances really appeals to me. The music and dance have to fit together as one and flow from one movement to another easily to be enjoyable to dance. We also began a morris side - Logan Morris.

A couple of years later I became ill with a mosquito born virus that caused me too much joint pain to morris dance. Our muso at the time having had a baby decided to take some time out so I started playing a xylophone so the group could practice. On Mayday at the Brisbane morris folk gathering to dance up the sun on Mt Cootha one of the other musos said to me that if I could play one of those I could play a piano accordion and offered to lend one. A couple of weeks later he dropped a 24 button box that belonged to Moreton Bay Morris at my sister’s house. I went to the library for some info on how to play it then went home and drove the neighbours crazy while I learnt. Logan Morris met at my house and my neighbours told me they always went out on Wednesday nights! I’ve since played for Belswagger Morris and was a founding member of the South East North West Morris side.

In 1993 my sister’s husband took her to the Colonial Ball for her birthday. The next year we all attended and I discovered the folk dance world. I had no idea that there were lots of other people out there as crazy about folk dance as I was. I felt like I had gained a new family!

Sellengers Round ran a Playford Ball in 1999. My late partner, Chris Green, came from Sydney to call the dances for the ball. He ran some workshops on rapper sword dance which is an English linked sword dance for 5 dancers. After he moved to Brisbane in 2000 we started Dance Kaleidoscope as a performance group. Our aim was to run a group for experienced dancers who like a challenge and wanted to try some of the more complex English dances. Chris also taught me English step clogging. He died in 2006 but I’m sure he would be proud of our group which has continued to thrive. We dance at folk festivals, old houses, birthday parties, weddings and schools. One of the great things about dancing is we never know what we will be asked to do next.

Over time I have become adept at calling dances for beginners and dancers alike. It is a challenge to be able to call dancers successfully through the dances and makes the hard work well worthwhile. Encouraging people to dance is very important to me. My eldest sister and I ran a school morris side for 8 years. The team consisted mainly of difficult boys who needed to expend lots of energy. They volunteered to come and dance in their lunch hour and enjoyed performing for the rest of the school. Sometimes some boys would be missing and we found out they were in detention! The headmaster decided to excuse the boys from detention if they were coming to dance! It was great fun. I still teach school children but usually short sessions to fit in with my shift work. It’s great fun as kids just love to dance.

When Denis and I started going out he introduced me to the Brisbane folk music scene. He first took me to the Kookaburra in 2008 and I was hooked. I’ve since actually attended concerts at folk festivals instead of only dancing! Mulgowie, Neurum Creek and Imbil - I enjoy them all.

George, one of Dance Kaleidoscope, made a 26 string harp with Jeff Welham in 2007. Somehow about 3 years ago the harp came to my house but sat in the corner unplayed. 2 years ago I asked George if I could have lessons to see if I could learn to play it. I had no idea what I was taking on. A harp is an incredibly difficult instrument to play especially when your fingers are set in their ways. I am enjoying learning immensely especially as Nora my teacher is very patient. My fingers are slowly learning to obey and be totally independent. Maybe one day I’ll be able to play for you.