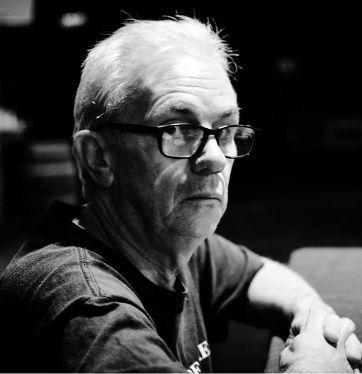 I was born in Sydney. My Dad was a musician and light truck driver, and my Mum was a factory worker in places like Arnotts Biscuits and Borg Warner. I used to help my Dad learn songs while we were out driving. He would sing the words and I would be holding on to the lyrics checking he got them correct. When he’d make a mistake I would pull him up and he would say I’ll sing the words I want to. We would have a laugh and then start again. He never pushed me into music, just waited until I displayed some interest. I remember coming home with a recorder from school which he promptly told me to take back. I said I would like to learn the xylophone and that Christmas one appeared. It wasn’t a toy, it was a professional instrument. At high school I joined the brass band and came home with a trumpet (the instrument that my Dad played). He didn’t tell me to take that back.

When I was about 14 my parents separated and I lived at my Grandmother’s for a while and attended Enmore Boys High which was a pretty tough school and a bit of a culture shock. The surprise at that school was the keen interest in music displayed by some of the toughest kids in my class. The music teacher was the conductor for the Sydney Youth Orchestra and was able to engage the boys in a way that was very different from the “usual” music teacher. He would sometimes bring his portable record player to class to play classical music. He would hand out score books of the piece that was being played so the students could follow the progress of the piece. I have to say that was a great way to appreciate classical music.

A year later when I was approaching 15, I moved to Cootamundra to live with my Uncle and Auntie, who owned the “Globe Hotel” there, though that wasn’t as much fun as it might have seemed. I joined an Anglican Church Choir and met up with some other kids who wanted to form a band and wanted me to do most of the singing. One of them lent me a four string guitar so I could play along with the songs. That was my first guitar and I loved it. Typically I was always getting into trouble for practicing and not doing homework. We got our first gig playing at a church dance. We learnt seven songs and we had to do four sets (called brackets in those days) so we had to play the same seven songs every set but we changed the order each time in the vain hope of fooling everyone at the dance. It didn’t work.

By the beginning of the next year my parents had re-united and were living in Kalgoorlie in Western Australia. They sent for me and I flew from Cootamundra to Sydney, to Melbourne, to Perth and then on to Kalgoorlie. I was so excited to be back with both my parents and this was to be the start of my entering the music industry. My Dad had a band and the bass player had to leave Kalgoorlie for two weeks on personal business and my Dad asked me if I thought I could fill in on bass. Weeks of practice followed and I did the two weeks with pains in my hands and arms and blisters on my fingers. I loved every second of it. Following that, my Dad asked me if I would like to play organ with the band. Of course I said yes, so with the help of the guitarist I learned all the chords for the band’s repertoire and spent six months on the side of the stage, pretty much out of sight, playing organ for my Dad’s band.

We moved to Perth just before my 17th birthday and after a few months and the odd pub gig around Perth we scored a residency at an iconic Perth nightclub, “Lindy’s”. We played six nights a week from 10pm till 3am and had the cream of Perth’s musicians coming in for jams every night of the week. That was a great grounding for me to be amongst such accomplished musicians. By the time I had turned 18 I knew what it was I wanted to do in my life. There was no thought of anything else but being a musician.

After I turned 18 the band, now called “Hi-Way 1”, set off for north Western Australia. We were booked to play the Walkabout hotel circuit from Geraldton to Port Headland. For about a year we made our way north until we reached Darwin where we worked for about another year. One night a few members from the “Troubadores”, a very popular show band, were in the audience and were so impressed with “Hi-Way 1” they called their agent to tell him about us. The agent was Ivan Damon one of the most influential agents of his time. Ivan had venues all over Australia that he booked and had more than 80 bands touring the country. Our next stop was Queensland.

We played Rockhampton and Townsville for around three months each and then headed to Brisbane playing at a club in Fortitude Valley. By the time I was 20 we had played at many hotels in Brisbane and I decided that it was time for a change. I left “hi-Way 1” and worked the Brisbane clubs and hotels for a while. By my 21st birthday I was working with some great musicians, we were later to become “Witzend” and lifelong friends.

Now 40 years later I’ve worked with some of the best entertainers, musicians and singers Australia has to offer, toured Australia several times and made some wonderful friends along the way. The music industry isn’t what it was. The gigs are fewer, the money relatively lower and the night clubs have changed. Don’t get me wrong I’m still out there working, just not as much. I’ve decided recently that all the knowledge of stage that I have acquired over the years I would like to pass on to other promising entertainers and musicians. So with that in mind I’ve started up a Training and Mentoring business called Rob McGowan Stage Coach. Hopefully that will keep me going for another 40 years.