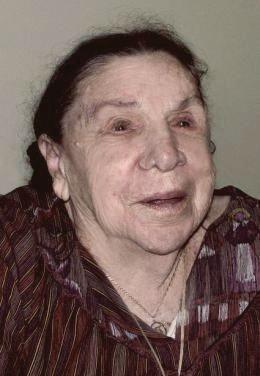 C. Pamela Gallagher, nee Hussey, was born in Werribee, Victoria and grew up in Broken Hill and Adelaide before moving to Brisbane. She was the daughter of Herbert Bindley (Bert) Hussey who was an early 20th century aviator who flew the early QANTAS flights and, indeed, flew the first QANTAS international flight out of Brisbane. As a child Pamela played steel guitar and the family often sang around the piano, played by her mother, Una.

Pamela became involved with folk music in 1972 after moving into a house rented by her son, Martin Gallagher. This accommodation was shared also by daughter Cyndi Gallagher and Mary Brettell, who were all involved in the Brisbane folk scene. Pamela began attending the Folk Centre and says one person who left a lasting impression was Ted Egan. She loved his music and remained friends with him for several years.

She joined the Queensland Folk Federation when Bob Michel was its president and after serving on the committee eventually became QFF president herself. She was also elected as secretary of the Australia Folk Trust (AFT) and recalls Queensland was the only state allowed to have three representatives as she talked them into it! The AFT met in several different states and wherever it was held Pamela was usually interviewed for local radio.

Pamela’s Folk Scene involvement was mainly in organising events. She ran school concerts and invited local folk musicians to perform. Other folk concerts Pamela organised in Brisbane were the monthly Roma Street Forum Concerts (1972-75), Warana Folk concert at Brisbane City Hall (1974), a benefit concert for Colleen, the widow of Declan Affley, a benefit concert for the Darwin victims of Cyclone Tracey in 1975, That’s Australia All Over for Warana (1982), Folk Spectrum for Warana, compered by Bernard Bolan (1983) and folk concerts for high schools (1993-94). Dances included Fling Things which ran for three years at the Foresters Lodge Hall at Latrobe Terrace in the 1970s, Orientation Week folk dances at University of QLD 1976-78 and the Commonwealth Games Bush Ball at Cloudland in 1982 where she and Martin Gallagher received the guests. Performers at many of the above events included Eric Bogle, Don and June Nichols, Tony Miles, Mary Brettell, Martin Gallagher, Peter Reye and Cyndi Gallagher.

Bob Hudson compered a Commonwealth Games concert Pamela organised in 1982 and received accolades from organisers when everything ran smoothly and on time. However, the last to go on stage were a group from the Sunshine Coast who had everyone dancing on the lawn in the Brisbane Botanical Gardens and the concert over-ran by an hour causing the workers to ask if they would please stop so they could go home.

When a concert she arranged at the Darling Downs Institute of Advanced Education was cancelled due to rain Pamela insisted on payment for the performers who had turned up to play, to cover their costs.

She also organised the Mediaeval Fayres for the QFF for four years and, also for the QFF, the Moreton Bay Folk Festival in 1973 and the National Folk Festival in Brisbane in 1974. At the inaugural Mediaeval Fayre, the brainchild of Dale Riddle, and held at the Priory at Brookfield, they estimated and catered for 500 attendees but around 2000 turned up and they had to send out for more supplies. The fare included mead and mulled wine. The Mediaeval Fayre later moved to St Francis’ on Milton Road and Pamela recalls one year they were kept busy making 20 knitted shawls to sell.

Wine and Cheese fundraising parties were also held for a number of years at Pamela’s Bellevue Street home. Many hours were spent singing and playing music and hardly a room in the house was without music makers. She recalls getting up one morning after a wine and cheese party to find Martin and another person asleep on the couch in the living room and Alan Forshaw and someone else sprawled on Martin’s bed.

Pamela recalls doing several trips to Taromeo Station, as mentioned in the song Brisbane Ladies, written in 1897 by Saul Mendelsohn. Taromeo was rediscovered by an intrepid group of folkies who, in the 1970s, decided to retrace the old stock route. They were so welcomed by the owners of Taromeo at the time that the folk community were invited to return for camping and music weekends. There was a folk festival held on the Taromeo property around 1979.

Pamela was very useful to the QFF and the folk scene in general as she was at home all day and could make phone calls and arrange events. One such event was a trip to Goondiwindi where she hired a light aircraft to take the Wayfarers out for Dancing in the Park where they performed on a truck bed, trying to get the locals up to dance! To Pamela organising these things was like a full time job and she was busy all the time.

Pamela also did calling for dances. She once got herself into trouble when someone commented to her that folk dancing was the same as country dancing to which she replied no, country dancing is just people walking around looking bored. With a grant from the AFT Pamela helped to organise and assemble a set of cassette tapes and books of instructions, titled Let’s Dance Folk, 5 minutes a side, everything colour-coded to avoid confusion. These were sold all around Australia and some to the USA and Germany, the profits going back to the AFT.

Pamela recalls son David Gallagher did a lot for her and the QFF. At one meeting at the Metro Arts Centre David was nominated as secretary and took the minutes, which he had never done before. Needless to say, David had not realised that he did not need to write down everything that was said and so the minutes ran to 15 typed pages!

During all of this organising Pamela managed to study for and acquire a Bachelor of Arts (even through the adversity of breaking a leg and losing her daughter Cyndi in a car accident in 1981). During her time at Uni of Qld she formed the Uni-Que folk club which was a weekly event which provided a platform for seasoned artists and new, up-and-coming musicians. She insisted on total silence while performers were on and instigated talking time between acts. Pamela says Dear, I am a bossy bitch – but it was the only way to get things done.

Besides the scheduled wine and cheese parties Pamela also recalls numerous other folk gatherings at Bellevue Street. She would have gone to bed and Martin would call ahead and say Party and she would get up and open the house. One night there were musicians spilling out onto the footpath (the house being located very close to the street) with people dancing on the pavement and (luckily) the people across the road opened their windows so they could hear the music better. Bellevue Street is now part of the XXXX brewery complex and the only thing that remains from no 8 is the big old mango tree which was in the back yard.

The QFF worked with youth of the Polish club and there was interaction between these two groups for a time. Overseas visitors were brought to Bellevue Street and folkies went to the Polish Club to perform.

At all of these events Pamela took along her trusty cassette tape recorder and she has literally hundreds of hours of Brisbane Folk Music History recorded and sitting in a suitcase in a cupboard in her little flat.

C. P. Gallagher is an accomplished author having published three books of poetry, a children’s book The Big Steam Roller, For Those in Peril (an anecdotal history of her life on a light station (lighthouse) with husband Dennis) and countless short stories in numerous publications. Her list of awards attained in writing competitions is far too numerous to mention and would easily fill a page. She taught creative writing for 12 years and has conducted workshops and given lectures and interviews on writing also too numerous to mention here. Failing eyesight has not dimmed her passion for writing and Pamela still writes with the aid of typists who visit her regularly. Her story, Television, Televison was recently chosen to be read out on radio 4RPH.

Was it the fallen Lucifer who lit the fires?

Creating pandemonium across the land

His heavy breathing strong, like a cyclone's gale force wind

Destroying homes and all that stayed within

A cacophony of misery, of stock held in by the fence

So bleating sheep and bellows from cattle with no place to go, they died

While wombats, echidnas and koalas with legs so short

Confused survivors grieve when they try to count the cost

To them and Victoria and its paradise lost