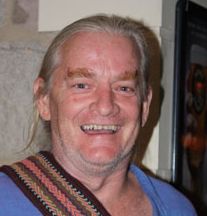 Well it all started in 1962 with stomach pains in my mother. The doctors at the RWBH diagnosed it as a peptic ulcer. We moved to Sarina in '64 as the old man was a customs officer. '68 moved to Mackay started school. My brother and I decided to steal a dinghy and row to Townsville. We almost drowned in the Pioneer river.

The family moved to Brisbane in 1969. Being from a Catholic family we attended church on Sundays ate fish on Fridays and mum and the neighbours played the Hammond organ and piano every Friday night. The old man was completely tone deaf. He kept the whiskey and beer flowing. I occasionally played the ukulele. Began playing the guitar because I grew big enough.

Attended Nashville state primary and high schools and I was a terror to my teachers at high school. At the end of school discovered what beer, girls and music did to you so I was rabid on those for a while. Well okay, a long time then.

Played in various bands and got absolutely nowhere, I think cause none of us were sober enough.

My first contact was Glenys Johnston busking in the Queen St mall in the early 80's. I thought she was sweet cause she smiled at me. Met Dan & Pete Holmes in 1983 and formed the Red Brigade until we found out it was a terrorist band from Spain. Eventually met the Folk crew in Brisbane. You all know who you are so I am thinking warmly about you all. Sorry to all the sheilas I knocked back but it was more of a time factor than anything.

Travelled around the land of Oz busking and terrorising the local faithful. Met Jeffery Bogga Jones in Perth and had a Friday the 13th party in 1985 and got voted party of the year over Bondies daughter’s wedding the Gone With The Wind bash. Even got on the worlds most wildest parties TV show.

The best festivals I attended was the Newcastle Folk Festival and the National at Cronulla Sutherland.

Woke up to myself and got a job in the hospitality industry and helped get the Maleny/Woodford thingo happening. In 1992 had a beautiful daughter Ellinor Khan and she attended the 92-93 Maleny Festival. '94 saw me manage the YES club with Phil, Kylie and Celina for the QFF and had a fat time in more ways than one. Got arrested on new years eve the first year it was at Woodford. Ended up with a golden handshake from Bill and he wished me luck in my future endeavours. Everyone was so sad to see me go.

During the 90's worked and lived in Waynes World where I kept up the good work at Woodford and other places taking on the role as service manager.

1999 saw me travel to Thailand to see Billy Page where the Thai government was generous enough to house me at modest cost to myself in one of their hotels. It was twin share with 138 others in one room the size of 2 classrooms. Got out of there real quick. Thanks for helping spring me Pat.

The year 2000 saw me head to India where I found God but forgot where I put her. While I was there I came across the Maharishi's Beatles ashram where we put on a concert for George when he died. It was such a cool gig outside of number 9 meditation dome. We all thought it was appropriate as number 8 just didn't have that same Ringo to it.

Decided to get educated so I did a BA music and Grad. Diploma Edu at UQ St Lucia. During my semester breaks I travelled back to India for more meditation.

Met Tanya Greaves years before but despite that we travelled to India and made a baby in 2006 Grace and made another one in 2007 Rosa. Recorded my first CD "42 in the Shade" and I am yet to do a CD release ceremony but I’m into yoga now days therefore I don't release anything.

Now living in Ipswich where I am full time daddy and Tanya works as a nurse at the Mater.

Blessed is the one and all happy in AUM to you all.