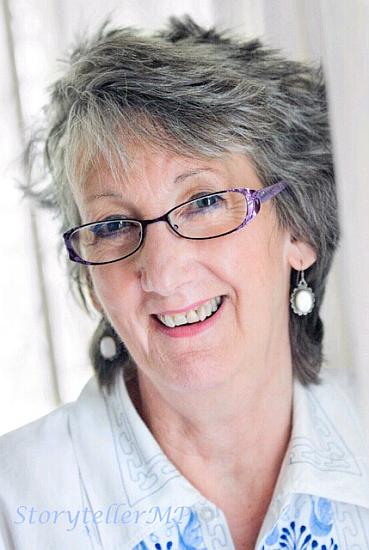 Born into a family that could hold a tune, I spent my childhood in Fife, Scotland, happily singing to myself. For a shy kid, I was a good listener but school was a trial. I learned to cope with high school by cracking one-liners. One afternoon after Year 9 Chemistry, Mr McCracken, waiting for the last bell, asked us in turn what we were going to be when we grew up. I had not a clue. Before I opened my mouth he quipped, "No need to ask you, Philp. I know you’ll be a comedienne", which cheered me up immensely.

I became a Primary teacher who loved reading stories to the kids, games and drama. In 1975, I was ready for a new adventure so I applied for a year’s teaching contract in Queensland.

Landing beside what looked like a Nissen Hut at Brisbane’s International airport, I began to think I’d been too hasty. Luckily on my first posting, I fell in with a good crowd in Rockhampton. Listening to the way people talked, how they told stories and jokes, helped me fit in. People wanted to hear my story, and I theirs. The landscape was beautiful, the light so different and 'Oh my god,' the sea and the sun! I elected to stay on and am really glad I did.

The letters I wrote home, and my phone calls, telling people about my adventures made me a storyteller of sorts, then.

I next applied to become as a Teacher-Librarian. Intrigued by Australian literature, I went to a storytelling workshop.

Patricia Scott, from the Tasmanian Storytellers Guild very quietly told stories to the crowd and I was caught up in the spell of 'Once upon a time.' She explained the process and I just had to try it. Back at work, our preschool teacher was happy to let me practise on her kids every week. One morning, a crowd of mums up the back were noisily chatting so I started to embroider 'The Three Bears' with domestic details that got them all grinning. The kids were sitting like fledglings in the nest. Here was fun.

After I was transferred to Library Services in Brisbane, I joined the new Qld Storytelling Guild in 1985. As their networker, I fortuitously organised a Toronto storyteller, who I’d heard was passing through, to tell in our meeting room and drummed up an audience. Joan Bodger wove the medieval tale Sir Gawain & the Loathly Damsel so intricately that I saw it all. Over the next fortnight I retold it 9 times to any friend I could get to sit still for 40 mins!

Feeling inspired, I persuaded the Guild to run a Storytelling Café, like the one in Toronto Joan had told me about, First Friday of each month. I found our first venue - the Metro Arts Café in 1986. (We ran in various venues for the almost twenty years.)

Tellers came when they could and Guild members used to worry in case only one turned up and had to tell for the whole 2 hours! "Ach!" said I. "It’ll never happen!" It did once. I held the fort, telling every story I knew. Some nights we had over a hundred in the audience!

We ran workshops and festivals in Brisbane but I was determined to learn more from Joan Bodger, who lived six thousand miles away in Canada, so… I successfully applied for a Churchill Fellowship, which provided the funding to travel throughout the United States and Canada for three months, working with Joan and meeting other well-known tellers throughout North America. I interviewed 36 tellers, and Joan became a close friend and mentor, until her death in 2002.

What a trip that was. I made new friends and got to tell in front of so many different audiences, in unexpected places - was introduced once as the winner of the Woodrow Wilson Award! My motto became, "Well, I’ve come this far, may as well…"

I learned how to tell traditional tales - folktales, myths, legends, fairy tales - and I especially like ones with a verse I could set to a tune and sing. I’ve found that people love being sung to in stories.

I shared my Churchill Report with all the Australian Guilds. I’ve recorded a CD called, "Taking My Future Back", which is a collection of personal and traditional stories about growing up, and have a live recording of a concert at U.Q. "Tales from an Oyster Bed".

The reality is that storytelling is a give-away. I tell a story to listeners, in person, that they might enjoy. Hopefully, they do and pass it on. I don’t learn any story by heart. I’ve researched all it’s facets beforehand so I can tell it to the audience convincingly, confidently, while peddling 'like billy-oh' underneath.

After all these years, I still love to travel. All my travelling is connected with storytelling - to tellers, festivals and conferences. Last year it was Invercargill, (NZ), Victoria, (BC, Canada) and Seattle. I’ve told on stages and in great halls and performance tents, but also in cars, buses, trains… and on bush walks. On one occasion, as part of a tour of Arthurian Britain, I was asked to tell the legend of The Sleeping Warriors (who, they say, will rise up to fight again to save England) in the very cave where they were said to be buried. I stood in the back, with the group silhouetted in the cave mouth. The acoustics were fantastic. In my mind’s eye, as I told the story, I saw those knights slowly rising behind me. The hairs on my neck rose too. I was glad to get out of the cave when I finished!

With the Guild still in limbo in 2013, I formed Storytelling Unplugged which Hosts every 2nd Friday of the month at Grange Library, Brisbane since 2013 - except Jan - to listen and tell stories in an informal setting. Do read the BLOG: Story Twigs the Imagination!

Thanks to friend Sue Wighton, I became a regular at the Red Hill Folk and really appreciate our Wednesday nights. Sometimes I tell stories but mostly I join in the choruses, heartily – yet another place where being part of good company and singing, goes hand in hand with storytelling.