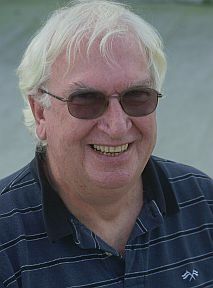 Just why Michael invited me to submit a profile I'm not sure. Perhaps he is sick of answering the question Who's that odd bloke over there that seems to pop up everywhere?

My first foray into the world of entertainment was in a Boy Scout Gang Show presentation, aged about 10. I was dressed as a waiter and sung the memorable verse You grumble when the soup is cold or when the meat is tough, but if you saw the way it's cooked you'd never touch the stuff. The Scouts were also responsible for my first musical instrument; a bugle. In England many troops had drum and bugle bands which performed at local fairs and similar events. So far that experience hasn't been called upon in the folk scene but perhaps it gave me an early bit of ear training. A friend had a toy plastic guitar that I tried once, picking out a few tunes. I wasn't aware that notes were changed by fretting so wound the keys up and down to get what I wanted. The tune probably lacked the fluency which I've now almost attained.

Mum had achieved some reasonably high awards in singing and piano in her teens and there was a piano in the house but I don't recall ever hearing her play. I had some interest in the piano, picking simple tunes out by ear, but there was never any suggestion that I be given lessons. Looking back it seems a wasted opportunity. What music there was around the house was mainly Dad's collection of classical 78 rpm records played on an old wind-up gramophone.

In 1965 the family migrated to Australia, near Melbourne. Neither piano nor wind-up gramophone made the trip. We had no TV and the only radio was turned on for the ABC news, then turned off again, so there was little musical exposure until later in the year when I found an old “Air Chief” car radio on the local dump, removed the twelve volt power supply and built a 240 volt supply for it. That opened a whole new world of music to me. The radio station that became my favourite played mainly what I now know as folk revival songs - I loved The Seekers. When I later bought a little record player I had all of their EPs, especially enjoying the one that had Judith Durham in a knee-revealing short dress on the cover. I don't know what songs were on it.

Aviation became my obsession and then my career. This entailed being transferred all over Australia and PNG, often away from the mainstream popular music scene. When 21 I bought my first guitar - a nylon stringed Maton. Unfortunately there was no teacher there in Broken Hill but eventually I was introduced to a series of books and cassette tapes which got me started. More transfers followed, some lessons were obtained, the Maton was replaced by an Aria, then that was damaged on a transfer to Darwin and, as I knew nobody to play with, I lost interest.

Fast-forward to 1994 and I moved to Brisbane, just in time for the Woodford Folk Festival, its first time at the current site. Not knowing what to expect I went along. What an awakening that was! A new world of music, comedy, poetry, interesting people with totally different lifestyles to my experience, vibrancy, fun! Needless to say that became my annual pilgrimage, always managing to find a way around the shift work to get to at least a few days of each festival. Involvement in The Planting followed and that is where I started to make new friends within the folk scene. There were many performers that were added to my must see list but top of the bill was a new duo - Cloudstreet.

One year, probably around 2005, John Thompson and Nicole Murray, with Andrea Baldwin, ran a singing workshop at The Planting. Not thinking of myself as much of a singer I went along simply because it was them running it. Another revelation! There were techniques that could be learned in order to become a singer. A few weeks later those three and Helena Bond, as The Voices, ran a more comprehensive workshop. I was hooked! Around the same time Tommy Leonard initiated a session in Landsborough. It was a very nervous and tentative beginning for me there but finally there were people that I could play along with and who provided the incentive to keep practicing and progressing. I was a folky at last.

Thanks to a singing session at Helena's house one Sunday I met a newcomer to Brisbane, Jane Becktel, who was about to form a new community choir, Morningsong. I didn't know that such things existed but the concept sounded wonderful so I joined, meeting every Friday morning in Bulimba. The caring, non-judgemental atmosphere that Jane created is just what the new singer needs. Unfortunately Jane had to move to NSW though knowing from their workshops that John Thompson and Nicole Murray would keep the same atmosphere we invited them to take the reins and were delighted when they accepted.

Several bands were using an instrument unfamiliar to me - the mandolin. It sounded great so I got myself one with the intention of trying to play some of the accompaniment that they were doing. Just at that time Nicole Murray started a weekly workshop in Maleny teaching Celtic tunes. That sounded way too difficult for me but I gave it a go and got hooked on them too. The mandolin proved to be too quiet in sessions but Steve Cook gave me the good advice to get a tenor banjo. Blame him!

I'm in debt to many for leading me into the folk scene but one name stands out. If good teachers teach and great teachers inspire, Nicole Murray is the latter. Thank you Nic!

Now you'll usually find me in The Folk Choir, Morningsong Choir, Maleny Ceili Band, Brisbane Celtic Fiddle Club with Emma Nixon, at Don Jarmy's session, or lurking around The BUg or BMB with camera in hand.