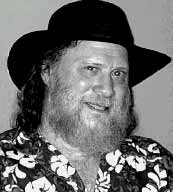 I was born in a little village called Sulhampstead in Berkshire, England at the end of the war, (I'm not saying which war). I actually grew up in various parts of Sahf Lon'on. After the war, parts of London were grim with scattered sites of houses flattened by bombs. These were often "playgrounds" for us kids and many the skinned knee I've had from falling in the rubble (sounds like a good title for a song!).

My earliest musical memories were from the radio in the early fifties, listening to such songs as The Laughing Policeman, I can't do my Bally Bottom Button Up and Flannigan and Allen singing Run Rabbit Run. At that time there was still a strong influence from the music halls in popular music in England.

Raised by a single mum I was exposed to, if not influenced by, her musical preferences. I still remember great chunks of South Pacific, Oklahoma, My Fair Lady along with offerings from Gilbert and Sullivan. Although not my "preferred music", by contrast I had a thorough grounding in Glen Miller and Louis Armstrong for which I was much more thankful.

School holidays were spent with mum's brother, much more my style. I listened to his Jazz records. You know, the proper stuff that existed before the sixties Trad Jazz revival. One magic day, I was about nine, he took me to my first music concert. We saw Chris Barber and Otillie Paterson at The Domes in Brighton. She could really wail that Otillie, but there were two other special events that night I will always remember.

During a break, a core group of banjo, guitar and bass promptly launched into the Rock Island Line. I was witnessing the birth of skiffle at the time Lonnie Donegan was still playing banjo for Chris Barber. If that wasn't enough, the next feature was Sonny Terry and Brownie McGee - my first exposure to 'black' music. From then on my musical preferences were consolidated - traditional jazz and Negro country blues. Later the whole folk resurgence came along and put the icing on the cake. Mister Zimmerman came along and challenged many people's concepts of folk music. For me he just blew away the boundaries and showed that you didn't need to sing "sweetly" to perform. Then Peter, Paul and Mary showed me that harmonies and different arrangements can transform a song (I'm still working on the harmonies).

With my first guitar I learned three chords and was hooked. Bugger me it was so simple! I haven't truly mastered those first three chords, but as I always say, I was never one to let a lack of talent stand in my way.

Murf. Oh yes, then there was Murf the originator of the Nyaaah - Noel Murphy from Country Kerry who sang all of the wild traditional songs of his homeland. I was hooked, bought him a drink, (he can down a pint of Guinness in a single swallow) and, as he didn't drive, offered him a lift home. The following day I found I'd offered to be his roadie. Many, many gigs later, I just about have his repertorire down Pat. (That's an Irish joke).
In '72 I met Roni, went to a couple of concerts, saw Elton John and Led Zeppelin (well they were free tickets), and shortly after we came to Oz.
For my next birthday Roni presented me with a Twelve String. Huh, you think I had trouble with three chords - you shoulda seen me tryin' to master twelve strings. The next twenty years the twelve string sat on the shelf as we were busy working at our own business. The late nineties came and I closed our business through ill health. A year later we were invited to Mary Brettell's birthday party. We knew Mary from the mid-seventies but were too busy to become involved in folk. (shock, horror).

At Mary's party everyone walked through the door with an instrument case. I thought "Cor blimey, what's occurring?" So this kind lady gives me a little yellow book which I took home, read from cover to cover, saw the ad for the Kookaburra Café, and Roni said I should phone this Stan Arthur geezer and fine out wot's wot. (Roni don't reely talk like that, 's just a bit of poetic license). I fink she was just tryin' ta get me out from unner her feet.
I went to the next meeting, had a great time and thought "I could do this too". Stan came and introduced himself, and made me feel so welcome. I blurted out "No fear of lettin' me avagog I s'pose?" to which Stan responded by pulling out a cast iron contract, made me sign in blood on the bottom line, said "I'll fill in the details later, son" and the next week I was on.

Next week me and the twelve string (remember the twelve string?) arrived, were given the one time only introduction and the rest is history. After the set it took me ten minutes to unclench my fingers from the guitar. One thing I will say is that the Kookaburra folk are very kind to newcomers. It's just if you plan to keep coming back you had better develop a thick hide.

Stan asked me (remember the contract?) if I would play with the Wayfarers. I knew it wasn't 'cos of me outstandin' guitar playing. One week we had five guitars in the line up. I thought, "this ain't on" so I went on to fulfil anther dream of mine, to learn the tenor banjo. I use the term "learn" loosely, but soon I was able to play enough to add a bit of balance to the W's and as it's only got four strings, it was three times easier to play than the twelve string. Here I'd like to include a word of thanks to Don Nichols who lent me his banjo, giving me the incentive I needed. A bonus was that when I got my banjo license, it also allowed me to drive a mandolin, so I have gone from being a pretty average guitar player to being a .....pretty average multi-instrumentalist. Oh yes, I began writing songs. With exposure to the capers at the Kookaburra it's hard not to.

Now I'm recording songs digitally (another big learning curve) and am enrolled in a year's music course at TAFE to try and knock the rough edges off.
I would like to say a heartfelt thanks to all the folkies I ever met. As a class of people you're the best.