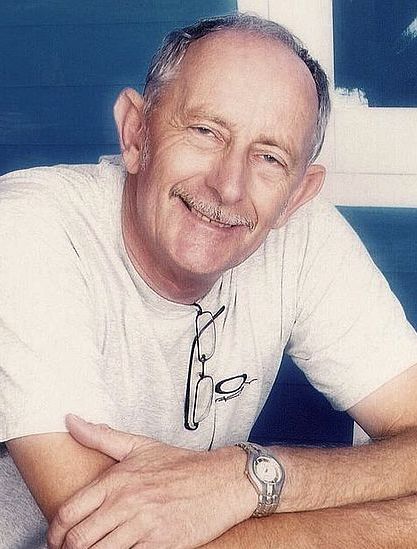 Hi there - Michael has been on my case for centuries (it feels like that) to put together a profile. Believe me, you really do not want to know about that. Hey, I'm a grumpy old fart now, ready for the glue factory but ... don't say I didn't warn you.

The goanna (piano) was my first introduction to music as a young primary-school kid at Our Lady Of Mt Carmel Private School, on Cavendish Road, Coorparoo. My mother was a classical pianist and had visions of Junior becoming a concert pianist (well, with a name like mine, what else was my future?). How I wish I was born with a name like Smith or Brown - or Shinawatra ... yes that's the one I would have preferred. But, we are what we are! I could have been a telecommunications magnate and a billionaire.

The goanna didn't hold my attention for too long (2 years) before I wanted to emulate Bob Dyer and become a country & western "star". I remember him singing "The Death Of Willie" and that inspired me. Mum had graduated to a steel-string guitar by then and I sometimes had the chance to have a go at it. I hated the piano (a German Victor) - I would kick it as a child - and I guess having the lid slammed down on your hands didn't cultivate a bond of endearment, did it?

Further down the journey of life, I began studying the cornet (a genuine Boosey & Hawkes) complete with many, many leaks (it was in Jessons repair shop more than I had it) - and it weighed around a half kg heavier with all the soldering done on it.. My pièce de résistance was "Oh My Papa" that I would play in the evenings, during practice. The lady next door told mum that she always cried when she heard that being played. I was never able to ascertain if it was because it was full of so much pathos - or if it was so damned horrible. Later, I got a new, gold-plated trumpet and began "jamming" with a class-mate, Raymond Aldridge (a really great pianist who went on to tour the world with The Daly Wilson Big Band and with Galapagos Duck). Ray was magic on his Fender Rhodes - a master of jazz and blues. Ray and I only ever did a few church socials together. I would have been an embarrassment to him - besides, I was more into roller skating and roller hockey.

I toyed around with a novelty-shop three-quarter size nylon guitar made of 3-ply until I bought my first really good instrument - a Maton steel-string Jumbo that cost an arm and a leg. Somewhere along the way, that got traded on a Teisco electric bass and amp and I was into the surfing-music craze (you know - Beach Boys etc). Somehow, I ended up with another steel acoustic Yamaha that met an untimely-death after my son fell off a chair into the open case with guitar still inside. Here, Vince Amos makes his entrance into my orbit as I consulted him about a repair job. It was too far gone. Vince offered to build me a hand-crafted acoustic steel dreadnought crafted on the lines of a Martin. I agreed and engaged Vince as my Saviour. Unfortunately, Vince is a slow and careful worker - and I needed a new guitar, so I purchased a 12-string Yamaha and stumbled across this strange little hole in the wall, down a lane beside The People's Palace. I thought I had struck Nirvana ... well, sometimes. In reality, I had been sucked into the event horizon of The Folk Centre.

Fridays, Saturdays and Sundays were evenings when I tried to visit that venue - even started to play the occasional bracket ("set", if you please - we were all going to be professionals) and I was on my way to penury. Just joking - no, William "Stan" Arthur became my mentor and began to book me as a regular performer - and also gave me quite a few leads to get paying work at a few restaurants. At The Folk Centre, I met Keith Ross with his long-neck 5-string banjo that Vince, incidentally, had done a repair job on a few years prior. I first met Keith down the bottom of the lane, playing the theme from The Beverley Hillbillies. We started "jamming" and threw a couple of nameless groups together before coming up with a combination composed of myself, Keith, Ian Dodd and Bernie Dell. We christened it Hilltop Holdout. In the first incarnation, I played guitar and switched over to string bass on the second incarnation, after my absense of around a year. When I left the band, Mark Webber took over on bass and Matthew Harrison joined as fiddle player and mandolin.

Around about the same time, I bought a new Fender Jazz bass and a 100w Fender amp and began slotting into the occasional cabaret job as well.

Somewhere along the way, I slotted into a vacancy on guitar with Rantan - a relationship that lasted around a year. Next please! Then, I think it was a bush band called Borderline that was my last waltz with playing in acoustic bands. Really, I have always been a solo performer - it's what I like best. My final years were performing at The old Kookaburra Cafe before setting off for Thailand. Finally, I played a few times at Ann Infante's revamped Red Hill Folk.

I regard my best work as being with Thai music, both here and in Bangkok and Chiang Mai. These days I do not play music any more - but I still do translations of Thai songs into English and set them out as working charts with both Thai and English transliterations.

Since 2011, I have been writing for a website in Bangkok, mainly on social issues, human relationships, Thai history and Thai politics. - primarily aimed at the "monger" set of Farangs who frequent the Thai girly-bars. My aim has always been to champion the betterment of life for Thai girls who enter the bar industry.

Would I do it all again? Not likely - the hours invested do not equate with the money returned. The only thing that came close to providing a real income was playing electric bass in someone else's band or working on stage as a clown/minstrel at Dirty Dick's Theatre Restaurant. The positives were that I have had almost a lifelong friendship with Keith Ross, Michael Bourne and Vince Amos. I value these friends enormously.