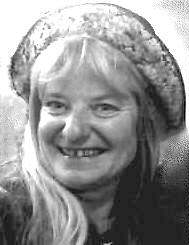 Joan lived the first 20 years of her life in Toowoomba. During this time she spent a couple of months each year at her Grandparent's sheep and wheat property near Coonabarabran. "It was during these visits that I was exposed to, and strongly influenced by, Australian songs, tunes and poetry. My Grandfather was a big fan of Henry Lawson and every day for a couple of hours he would gather all his grandchildren at his feet and recite his works. While my cousins would connive to escape I listened with rapture and have never lost my admiration for this great writer."

As a teenager of the 60's and early 70's Joan's musical influences were varied. "I listened to quite a diversity of music compared to others my age, but generally favouring the talents of greats like Bob Dylan, The Carpenters, Jim Croce, The Everly Brothers, Eric Clapton, Roy Orbison, Joni Mitchell and of course The Beatles. I always have had a keen interest in Australian music as well, listening to the likes of everyone from Daddy Cool to The Bushwackers. "

In 1976 Joan took off to 'the land of the long white cloud' for a working holiday and ended up living there for 5 years. "My partner at the time was well known in the rock 'n roll music industry there so through this connection I started learning about how it all works basically. Booking of gigs, promotions, sound systems, staging techniques and of course the frustration that many musicians have relative to getting their music out there to be heard. People like Neil Finn and Ian Hunter were struggling singer/songwriters then so it greatly pleases me to hear about their achievements over the years."

In 1981 Joan attended her first folk festival - the National in Brisbane. "My life took on a totally new direction and I literally haven't looked back since. My love for the traditional music, dance and spoken word came flooding back from my childhood and I was well and truly hooked." That same year Joan took up playing the penny whistle and mandolin and started to learn seriously about sound amplification. After mixing for a Toowoomba based bush band, Terpsichord, for a few years she progressed to being the band's dance caller and playing tunes on the whistle or mandolin whenever she got the opportunity.

The early 80's also was the time when The Lockyer Folk Festival at Helidon was born and the beginning of Joan's involvement in organising festivals and folk clubs. "The 80's saw me switching between performing with various bush bands, coordinating festivals, being Secretary, President and newsletter editor for the Toowoomba Folk Club, learning new tunes and general networking."Other bush bands that Joan has been involved with in Toowoomba are Brolga and Swaggering Boney .

In 1989 when Helidon was no longer available as a festival site, a new location had to be found. This was the birth of the Cabarlah Folk Festival which ran for three years with Joan as the co-ordinator.

In 1991 Joan moved to the Sunshine Coast and worked on the Management Committee of the Queensland Folk Federation as Secretary. Of course the Maleny Folk Festival was well and truly established by then with Joan's involvement mainly being in the bars (working, that is!).

"I always have enjoyed the music sessions that happen in the bars, working with a great bar crew and interacting with people. Bars are of course extremely social locations and they're the best places for catching up with everyone. The fun and laughter helps too."

In 1997 Joan began a short tour, which lasted two years, with Greg Hastings (a professional entertainer from Perth) and travelled extensively around Australia performing a children's show at kindergartens and schools. "The highlight would have to be performing at the Aboriginal Communities of the Kimberley and Pilbara regions of Western Australia. I always will feel extremely fortunate at having the opportunity, not only to see that part of my country, but also to meet the welcoming and friendly people of the communities. I learnt so much."

During this time as a gypsy she was able to meet many involved in the folk movement and gain an insight into what was happening nationally. In 1998 alone Joan attended fifteen different folk festivals and countless clubs. "Witnessing what is happening nationally with folk culture and the booming interest in it generally is something that everyone in the folk movement should be justly proud of. Attendance figures at festivals alone are staggering and this truly is a testimony to the Australian folk arts being recognised for its diversity and quality."

Not too long ago Joan moved to Hervey Bay where there is a thriving music scene. Now managing the Yag'ubi Music Club and becoming involved in the Yag'ubi Multicultural Festival , Joan is still actively involved in promoting folk culture.

"I could never imagine a time when I wouldn't be involved in one way or another. It really is a driving force in my life and I honestly would say that if I had the past twenty years to live over again I would not change a single thing."Says Joan.