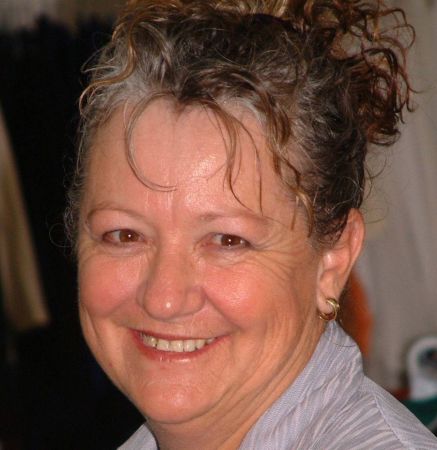 Like many other people I have met since starting on my musical journey my early singing was greeted by family members requesting me to sing Over the Hills and Far Away. ('So far away we can’t hear you') While this did not stop me from singing in private I was convinced I would never be able to sing in tune. (Many may say I still don’t but I am improving.) (ed: you are)

Although I was born in Brisbane I grew up in Mt Isa and did not really have much early exposure to music. My introduction came fairly late in life with my early interests being focused on more physical pastimes including horses, hockey, push bikes swimming and darts. It was a chance attendance at the Glen Innes Celtic Festival five years ago where I attended a performance by a Bodhran Player that my interest in music was generated. After the performance, the audience were invited to a workshop and I excitedly told my husband Leo that they told me I was a natural (well I might be exaggerating that a little but I did pick it up pretty easy). My husband Leo was sceptical and told me they just wanted to sell me a Bodhran. Well that worked well and I now have a fine selection of Bodhrans. I came home and did not really know where to go from there with my Bodhran but attended the Maidenwell Folk Gathering where I met Pamela Weekes who introduced me to the joy of performing and entertaining. Pam also probably gave me some of the best playing advice when she said, You should not hear the bodhran playing you should just notice when it stops. I think my singing was also helped when singing with Pam as her husband told me, Jane just sing however you like, if you are out of key I’ll turn off your mic.

Back at home, I was lucky enough to have some musician friends and we organised a music jam after work at my place of work. We became more serious and formed a band, Loose Cannons. As many of you will know it is not easy to keep a band together and after two years the band broke up. Prior to the demise of the band we found that the office had become a bit small for practice and a bit of an inconvenience for everyone especially my work mates who had to work around our guitars, drums and keyboard. Then to save the day a SHED came on the market. Perfect position, walking distance to the office and in the main commercial section of town with council carpark and toilets adjacent. I managed to convince Leo it was a great investment with storage up top and a music venue down stairs. (OK I told him it was a storage shed but he is not silly and has worked out now what it really is, The Shed Nanango, the centre of Nanango’s music scene). From there I have organised a couple of scratch bands and a few of us get together on a Sunday at the Shed. My Niece Julie who is a “REAL” musician sometimes shakes her head when I tell her we have a gig and got paid to do it.

After my first Bodhran I bought a number of others, one while in Ireland with Pam where we played at a true Irish Pub session. I then invested in a drum kit but as my skills are limited here, I have decided that I am a percussionist as I like to produce a different sound. Then two years ago after a short period with a ukulele I bought my first guitar. I now have a number of different instruments and while I will never master them I am happy doing what I can with music. While I am a real novice I take any opportunity to play with others and I am just absolutely loving it. Because of my lack of musical knowledge from my youth one of my main difficulties is finding music I know, I like, and I can play, given my inexperience with chords. I will try a new song and Leo will ask, With all the thousands of songs out there why would you play that song? My reply, Well Leo, it is slow and I can change the chords.

Since my music journey began I have met and made friends with some amazing people who happen to be musicians and I love having visitors come and play with us at The Shed. We have had Alison and Bop Bell visit from Brisbane, Margaret Shaw from Crows Nest, Noella and tan Dwyer from Gympie and Pam Weekes from Canberra visit and shed with us. I also enjoy getting together with other musicians at Maidenwell, Mulgowie and Kilcoy which are all informal type Gatherings. I have also been to The Mill in Brisbane and found it to be a great lot of people sharing their music. Most Friday nights is a music session at The Shed Nanango with visitors and locals enjoying the sharing of music. The Shed is also home to Elizabeth’s A Capella Choir and a ukulele group the Nanango Ukulele Troubadours. (NUTS) With help from promoter Val McGarry we have also held a few Shed concerts with such performers as Eleanor McEvoy from Ireland, Le Poules a Colin from Montreal Canada , Fromseier Hoskings from Denmark, Michael Fix (Brisbane) and Richard Gilewitz USA. Our latest guests were Madison Violet a duo from Toronto, Canada.