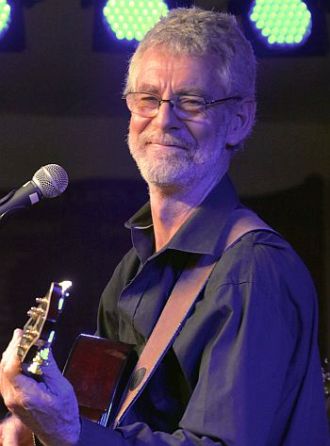 The low rise city, had only City Hall, Lennons Hotel and the Storey bridge to interrupt the skyline.

South Brisbane was a commercial wasteland but it was the site of the Cobb & Co coach terminal where I was deposited after a 20 hour bus trip from Sydney.

The heat and the primitive rail network reminded me of a Rod Taylor movie set in the Belgian Congo. The memory of my arrival in Brisbane is etched with these scenes.

I arrived in Brisbane after spending a year in Europe with my Dad. He had bought a business, a bakery, out beyond the city sprawl.

I attended yet another school as a new kid. The other kids in Pine Rivers were a mix of backgrounds, pineapple farmers’ kids, rural workers and city commuters.

Fortunately, I escaped the dreary Wednesday school sports afternoons that year. By a miraculous intervention, an alternative creative arts program was tried at the school that year. A guitar came into my life, along with a strange dude by the name of Graeme Marrow.

“Six degrees of separation” brings Graeme’s name back to me nearly forty years later when Mary Brettell via Michael Tully's Folk History Project, and the FolkRag both mention his passing (ed: informed by his friend in NZ). Graeme was an inspiring introduction to the guitar. He also mentioned the existence of the Brisbane Folk Club in Ann St. I must have heard all the acoustic folk players in Brisbane there.

Living then, at the terminus of the Brisbane suburban rail, I was subject to the mercies of the rail timetable. I’d catch the train to Brisbane, go to the folk club and then spend the night at The People’s Palace, thank god for the Salvo’s. The last train home ran at 11:17, I always missed it.

Surviving for years on the one term of Graeme’s lessons, I tried a few other teachers but mostly I hacked away at the Dylan catalogue. I was besotted by Neil Young’s songs. I loved acid rock and progressive rock but had no idea I’d ever play anything more complex than the easy chord versions of popular folk music. A career, marriage and then cruising/living on a yacht became my passions and obsessions. The guitar travelled everywhere with us and occasional musical epiphanies were rare moments of pleasure. Then I met and studied with John Mann who was also a yachtie, when we first met. John led me to another plane in music.

John Mann had played with J. O’K. As a young prodigy he toured with the O’Keefe band for years. In later life John completed Griffith Uni’s jazz course and took up teaching. He opened my mind to what my ears had been telling me. I loved Jazz.

About this time, 1989, I played gigs for the sailing club where we lived. I met and played music with a couple of people who gave me great encouragement. People arrived and departed in my life who had a greater connection with sailing than music. Life is layered though, with all sorts of co-incidence. Peter Harvey (Rough Red), Lee Nelson (Thornlands), Jim Howells (sorry Jim, I can’t name all the bands you were in) all helped me play a bit more and then we went on our way, following our sailing dreams.

Then I bumped into Lee Nelson 16 years later. He insisted I go along to a FolkRedlands’ Sunday show.

Folk Redlands nurtured me, there is no other way to describe that support. Members and audiences at FolkRedlands, to whom I’d expose my stage fright and limited musical ability, never shut me down. Every performance was a little better. Masterful musicians such as the C&C Eustons gave unstinting support and helped me have fun with my music.

As part of Folk Redlands I started to be part of the Wintermoon festival and then to visit the Red Hill Folk nd of course the wonderful BUg.

A playwright, Peter Giller (also a yachtie as it happens), asked me to write songs for a theatre piece he’d written. So began the fun of writing my own songs. I met Wendy Squire at FolkRedlands, we began to collaborate and perform with Sarah Morrison (Echoes of Eden). This writing thing was so much fun!

Sailing away again we dropped out of the folk scene for a bit then I returned to FolkRedlands where I found myself being more involved in production through the support of Patrick Burke, who would later record my CD.

Julie Minto’s generous encouragement helped me get out to play at various blackboard venues, it was her that found a nick name for me. Franké a neat play on my awkward surname pronunciation.

A special mention here, to praise the wonderful Mr Warwick Hargreaves, whose knowledge and patience has brought my love of music to a very exciting place. Meeting the wonderful Out of Abingdon at the Gold Coast Acoustics Folk Music Festival was a turning point for me. Old dogs can learn new tricks.

Recording my songs has been such a rewarding experience. As we polished the tracks the gleam of real satisfaction has glowed for me. The CD is another step in my musical path, I do hope to continue on that road of creative joy.

I am having heaps of fun writing, performing and sharing music with all of you. Every person who, as part of our musical community, has had a big impact on my journey, thank you so much; 1000 words is not enough, you know who you are.