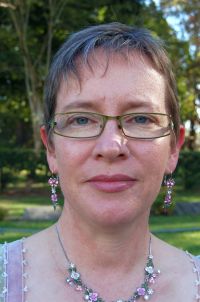 I was a child of the 60’s, born in Sydney. Both my parents were Queenslanders so we moved back, and settled in Sunnybank on Brisbane’s Southside in 1970.

My mother grew up in a very musical household. My grandmother could play any instrument, sing and was a published composer. Back then, women were not encouraged to study and so she had to turn down an invitation to study music at the Singapore Conservatorium.

Both my uncles were wonderful singers - one used to put on concerts and the other was the leader of a brass band. My mother was a pianist and one of my earliest memories was of her playing Chopin. She wanted her daughters to play music, so my sister and I started learning piano from the age of 6. I carried on studying piano doing the AMEB exams up to Grade 7 theory and Grade 8 practical. I also studied viola and violin and played in the School orchestra. I was always the pianist when the school had to perform at Eisteddfods and was also asked to be a lead singer in one of the school musicals in Grade 12. It was there also that my love of classical music became much deeper and much more informed.

After school I continued in my piano studies, mostly learning more modern forms of music and also playing at lots of singalongs.

However, as I got older other interests took hold, like bushwalking. There was a walk on every weekend and during my 20’s you would find me out in the middle of the bush or climbing up a cliff- face. One of the social aspects of bushwalking was the bush dances that the various clubs used to go to. This was my first introduction to the folk scene. There were the Clan Mackenzie Balls at the Greek Club, the Pilgrimmage bush dances, Jondaryan Woolshed bush dances, Marowah Farm bush dances, Jimboomba bush dances, and the monthly bush dance put on by Kitchener’s Last Band at Morningside School of Arts Hall. The Moreton Bay Bush Band later played at Morningside. It was at one of these dances in 1989 that I first met Roger Holmes. One or two of you might know Roger. We always ended up dancing together at bushdances and Colonial Balls.

I remember the wonderful bush dances that the Verandah Band put on at the Blind Hall on Thursday nights. It was there that I met lots of regular dancers and folkies. Diana Morris, later to be Diana Pascoe was my inspiration to become a better dancer and so I decided to get some basic training at one of the ballroom dancing studios.

My first folk festival was the Maleny Folk Festival back in the late 80’s. It then moved over to Woodford and I remember the Singing Shed and also the dancing. It was also where I fell in love with Blues!

Back when Expo 88 was in town, the Colonial Dancers performed at one of the events and I went along to watch and thought it would be great to be a part of so I joined the dance group and became a performer. We practised every Thursday night at the Dutton Park Scout Hall. Jan and Vic Orloff were in charge and we used to go to lots of gigs around the place. It was also great to see what costumes the other girls were making, and we all used to exchange patterns.

We performed as a group at The National Folk Festival in 1995, my first National. Wow! What a great place to dance! That was during the heyday of the Colonial Dancers. Nothing lasts forever however, and lots of the dancers paired off, married and started producing little dancers.

At this stage I was working as an Illustrator in a studio in the Valley and wanted to concentrate more on my own artwork so I decided to move to Queenstown, New Zealand in 1995.

New Zealand is a wonderful place to paint! I had a studio and used to sell work through two dealer galleries, one in the North and one in the South Island. It was a very productive time. There was absolutely no folk scene in Queenstown so dancing was put on the backburner. However, there was a very lively musical scene. Margaret O’Hanlon was a local singing teacher and producer of musicals. She ran a beginners singing course. I went along to it with a girlfriend just for a bit of fun. It was amazing, and so much fun. I discovered that I could sing!

After about 10 years in New Zealand, the homesickness became too much so I booked my ticket home to Australia in 2005.

Back in the wide brown land, a two year course in Graphic Design followed. I got back into dancing and reconnected with lots of old friends.

Roger was still there and he started taking me along to various folkie events, Abofots, The Kookaburra folk club and Folkies Old and New evenings. I also started meeting a lot of his friends, lots of musicians and singers and some of my dancing friends again.

His perseverence (or patience) paid off and we married in 2007. It was a bit like a rather large folkie event. We had a wonderful bush dance in the evening and most of the original Colonial Dancers were all back together again that evening. The Moreton Bay Bush Band played for us as their wedding present.

In this last year I have joined Kalediscope which is very ably run by Sheree Greenhill. We perform mostly English and Playford dances. I have just started dancing with them at various gigs - History Alive, the 100th year Anniversary of Shafston House and Stoker’s Siding Church Centenary. Of course it’s another chance to start making costumes again!

At the moment I am working as a freelance artist, illustrator and designer. My newest passion and obsession is botanical art. I want to establish myself as a botanical artist and end up making my living out of it, so when I’m not dancing you’ll find me with a paintbrush in my hand.