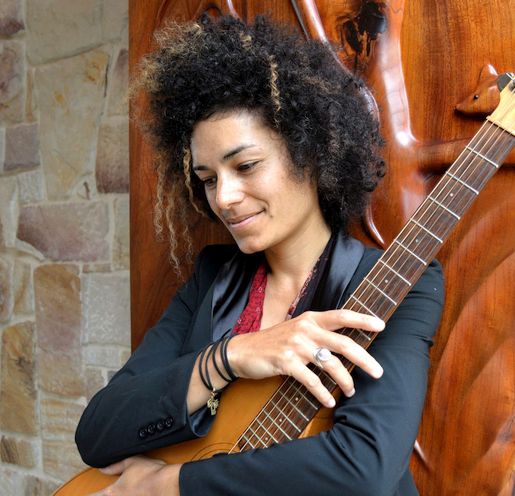 Some of my earliest memories as a child are of singing. Church songs mostly, both in English and Fijian. My mum met my Australian dad when they were over in Fiji, and moved to Townsville, where I was born and grew up. Being the eldest daughter of 3, I remember sitting together with my mum, A Fijian Church Minister, and siblings and singing in 3 part harmony. We did this everyday for Fijian lotu, or family church. I also remember that it was quite boring, apart from the singing! There was not much going on musically, apart from Church, and the occasional musical dvd such as 'The Sound of Music', which, as a 5 year old I enjoyed, but had no real idea of the story line.

One of my first musical memories was sitting on the school bus when I was seven, in 1992, and hearing Eric Clapton's Change the World on the radio. I thought to myself that it was the most beautiful song in the world. This song had a lasting impact on the type of songs I like to listen to. Easy listening, laidback and soulful songs. The kind of music I now love to create.

My mum had 2 sons prior to meeting my dad that also had an impact on my musical upbringing. When I was about 9 years old I inherited my eldest brothers CD collection when he went off to work in the Mines. Hiphop, American Gangster Rap and R&B entered into my life like a freight train of soulful emotions. Never having heard artists like Tupac and Mary J Blige I thought that this must be what real musicians sound like. I immediately started learning their songs on the piano I had at home and by age 13 I could play about 50 songs by ear and sing a long to the lyrics. My mum became more religious, and I became more rebellious and was eventually sent off to boarding school. At boarding school in Townsville, I used to sit in the Chapel of the Cathedral School and entertain the Torres strait Islander and indigenous girls with renditions of the newest Alicia Keys song or Mariah Carey hit. Those were fun times. When I turned 14, my parents divorced and I was suspended 3 times from school. During this time listening to my American music CDs was all that got me through the growing pains of adolescence.

After a hiatus to Thailand for a year living with my dad, I moved back to Australia and entered the privileged private school life as a boarder at Geelong Grammar School. I receieved a music scholarship which included a year's worth of singing lessons, which was invaluable in teaching me how to use and control my voice. I also joined the school choir and learnt how to sing in Latin, German and various languages and even went on a Choir Tour of Europe singing in various Cathedrals in England, France, Germany and Austria. My favourite experience on this tour was singing in Notre Dame. At this point I hadn't started songwriting, thinking that was something only professional singers like Whitney Houston and Lauryn Hill did. During my GGS days, my Housemaster, Mrs Helen Seymour, the sister of Mark Seymour from Hunters and Collectors, used to try to persuade me to listen to Australian Music, but I was only interested in music from American Artists such as Eryka Badu, Missy Elliot and Lauryn Hill... little did I know there was so much to discover in Australia!

After high school I followed my mothers directions into an Arts/Law degree at ANU in Canberra. Not many people know this about Canberra, but at the time I lived there it was a hive of live music events with Art student parties and original music everywhere you looked. It was at this point in my life that I discovered both my sexual orientation and how to express myself through writing songs. My first introduction to songwriting was through watching a Clare Bowditch concert at the ANU Bar, Canberra. It was 2006 and I had just realized that I might be gay, which, in Fijian culture was not an acceptable way to feel. In a flood of emotions, a friend of mine took me along to see Clare play, and I realized just how much beauty and soul can be held in a song, played by a band of 4 and shared with an intimate audience. All of a sudden it was like the floodgates opened and I realized that I have so much to share, that might help people who feel overwhelmed, just like how I felt that night. After that, I lay in my bed and looked at the stars, and realized this world is what we make of it. And that there is no wrong or right, there is only being. And being true to how you feel, is what life is all about.

The day after seeing Clare play, I picked up my guitar and started writing. The guitar had been a recent 21st birthday present from a friend, but I hadn't started playing because it hurt my fingers. Determined, I carried on, and after two weeks, a new friend of mine, George asked me if I wanted to busk at the Lyneham shops outside a gallery called 'The Front'. So off I went, and while we were busking, singing our handful of songs, the owner of the gallery came out and asked if we wanted to perform that Friday night at their One year anniversary. And so we performed our first show as 'Andi and George'. It was during one of the many gigs as the Andi and George Band that I met the love of my life Claire Synnott and her beautiful daughter Ayesher, who was 6 at the time. After 3 years playing together, 4 homegrown Albums and 2 east coast tours, the Andi and George band called it quits early 2009. The band broke up as the 14 members moved interstate and I ended up living with my family in Tathra, NSW needing a sea change and a good Steiner school for our daughter.

All went quiet for 3 years from 2009 - 2011, as I focused on being a mum, a loving partner and teaching singing and songwriting at the local music store in Bega. I still performed at a few festivals such as the Candelo Folk Festival 2009 and Woodford Folk Festival 2010. Early 2012 I received word that my partner Claire's parents were moving up to the Sunshine Coast to enjoy their retirement. As a close family we followed suit, which is how we came to be Sunny Coast locals.

On arrival, I began looking for a suitable studio to record my debut Album of 10 original songs and was recommended, 'Spark 1 Studios' up in Maleny. Over the next 3 years I recorded both my Albums, 'From the Ground Up' and 'The Story of Us' and have been performing with a new band of musicians from the Sunny Coast. I am excited to be performing once again at the Woodford Folk Festival this year with a new album and band. Who knows what 2016 has in store? But all I can say is that I am grateful for the road I have traveled up to this moment and look forward to the road ahead.