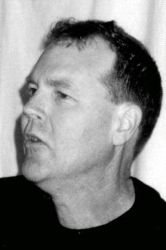 I grew up in Melbourne in the sixties. Some of my earliest memories are of singing around the house, (I think it was just stuff I picked up off the radio) an activity which probably prompted my mother to encourage me to get into the local church choir, which I absolutely loved, and where I think I learned a lot about singing.

I was 11 when the Beatles came to Melbourne, so they where the sort of background music to my high school years, but I always found myself leaning towards the acoustic music of the time, (I didn't know what folk music was), but I really liked Peter Paul and Mary, and Simon & Garfunkel.

The person I've always considered as being the most important influence from that time would have to be my high school choir master and head of the music department. His name was Norman Kaye, (yes, the actor) and he was amazing! As well as the hymns and religious music for the school church services, we also sang at the speech nights where we could do a more secular mix which included pop songs and folk songs. I discovered years later that the source for the Australian songs we did was John Manifold's Penguin Book of Australian Folk Songs. For that invaluable part of my musical education I would like to say a heartfelt "Thank you Mr. Kaye".

When I was in my late teens I started going along to some of the folk clubs around Melbourne and, hearing people playing contemporary folk which seems to have been popular at the time, this inspired me to think that I might be able to learn to play the guitar well enough to accompany myself. I played mostly the contemporary folk and folk-rock of the time and mostly for the joy of the singing.

Later I moved to Brisbane and it took a couple of years to find the Brisbane folk scene. My very first contact was when someone told me there was a bush-band playing at the Red Brick Hotel on Saturday nights. When I went along for a look, I found a bunch of people enjoying the sort of music that I had only heard rarely previous to that night. Not only that, but after the pub shut they were happy to drag me off to a party which seemed quickly to organise itself into singers in the lounge room and tune players in the kitchen and they were all doing stuff I never heard before but which sounded so real and natural to me that I felt that I had known it all my life. I think I thought I was in heaven that night, and needless to say I quickly became a Red Brick regular.

It was from these Brisbane folkie friends I really learned about traditional music. Previous to that I had no idea that people were actually playing that stuff. At that time in Brisbane (circa 1980) there was a folk club every night from Thursday to Saturday and a dance on Sunday and I was a regular at all of them, but the highlight of the week had to be the Sunday sessions at the Story Bridge Hotelwhere I began learning to play Irish music on the fiddle. Arriving here when I did was fortuitous because Brisbane was to host the 1981 National Folk Festival the following year at Easter.

(The National Folk Festival is permanently held in Canberra nowadays but in the early days it travelled around from state to state. Ed.)

The Story Bridge session had an enormous influence on me, and has given me quite a few lasting musical associations. It was about this time I met Julie Fraser (aka Julie McGonigal) mainly as a result of my devotion to bush dancing. Julie was playing with the Bale 'Em Up Band at that time, but managed to find the time to form a singing group with Kevin Kelly and me. Julie did all the arranging with that group and I learned a lot about singing and playing fiddle from that time.

As well as bush dancing, I was into Morris Dancing for a while with the Moreton Bay Morris, but I found that my attention was being held more and more by traditional (mostly Irish) fiddle tunes, and that is what I mostly pursued in the 80s.

I moved to Toowoomba in about 1991, and have been involved in various capacities with the Toowoomba Folk Club over the last ten years or so. I liked Toowoomba initially because it had a folk club, (Brisbane didn't at the time) and because I could still get to Brisbane easily to keep in touch with everyone there.

Lately I've been getting back into singing, as well as getting involved with a local (mostly bluegrass) session. I was proud to be a part of recent 30th birthday celebrations of The Toowoomba Folk Club.